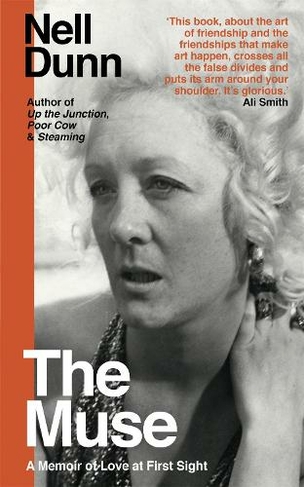 The Muse: A memoir of love at first sight

By Nell Dunn (Author)
Hardback
https://www.whsmith.co.uk/products/the-muse-a-memoir-of-love-at-first-sight/nell-dunn/hardback/9781529327922-12-000.html £11.99 rrp £14.99 Save £3.00 (20%)
GBP
Availability
In Stock
Free Delivery Available When You Spend £25 Or More
Details
Spend £25 on eligible products to receive free standard delivery to home or free next working day click and collect to store
Share

Nobody writes like Nell Dunn... always communally, with rare honesty, with love, and with calm and ground-breaking understanding... It's glorious. Ali Smith Nell Dunn has perfect pitch for the words we use and for the loves and mysteries of the human heart. Carmen Callil Defiant, funny and exhilarating. The Muse is so high-spirited and full of a sense of adventure. Margaret Drabble The Muse is the story of a life-changing friendship. It starts with Nell's account of a chance meeting with Josie at the age of 22. Josie teaches her how to live for moment, how to have adventures and find the sweetness of life even in hardship. This was the Sixties, a time of literary and sexual experimentation, of the breakdown of old barriers and inhibitions Even as she was hooking up with dodgy men, Josie always carried herself like a star, and as the inspiration for the ground-breaking novel of working class women Poor Cow and the play Steaming - both of which were made into movies - she became one, feted by producers on Broadway. Life is the thing, was Josie's motto. But where would her philosophy of taking no care for tomorrow lead her? In prose of unique clarity and simplicity that always gets straight to the heart of matter, The Muse follows this friendship over the decades.

Nell Dunn was born in 1936. She left school at the age of 14. Nell's father didn't believe that his daughters needed any qualifications, and wanted them to be completely original and unique.In 1959 Dunn moved to Battersea, made friends there and worked, for a time, in a sweet factory. She came to notice with the publication of Up the Junction (1963), a series of short stories set in South London. The book, awarded the John Llewellyn Rhys Prize, was a controversial success at the time for its vibrant, realistic and non-judgmental portrait of young working-class women. It was adapted for television by Dunn and directed by Ken Loach, and broadcast in November 1965. A cinema film version was released in 1968.Talking to Women (1965) was a collection of interviews with nine friends, including Edna O'Brien and Pauline Boty. Dunn's novel, Poor Cow (1967) was a bestseller made into a film by Ken Loach starring Carol White and Terence Stamp. Her play Steaming was produced in 1981, winning awards both in the West End and on Broadway. A film was released in 1985, directed by Joseph Losey and starring Vanessa Redgrave and Diana Dors.