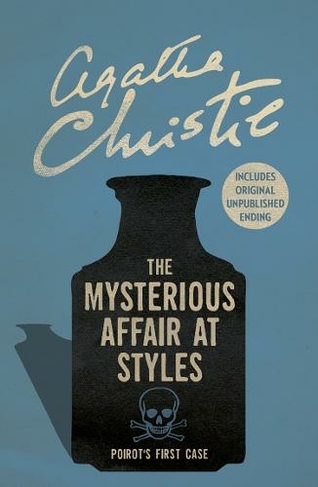 The Mysterious Affair at Styles: (Poirot)

By Agatha Christie (Author)
Paperback
https://www.whsmith.co.uk/products/the-mysterious-affair-at-styles-poirot/agatha-christie/paperback/9780007527496-12-000.html £7.37 rrp £8.99 Save £1.62 (18%)
GBP
Availability
In Stock
Free Delivery Available When You Spend £15 Or More
Details
Spend £15 On Eligible Products To Recieve Free Standard Delivery To You Home Or Free Next Working Day Click And Collect To Store
Share

Agatha Christie's first ever murder mystery, reissued with a striking new cover - includes for the first time the original courtroom climax as an alternate ending. 'Beware! Peril to the detective who says: "It is so small - it does not matter..." Everything matters.' After the Great War, life can never be the same again. Wounds need healing, and the horror of violent death banished into memory. Captain Arthur Hastings is invited to the rolling country estate of Styles to recuperate from injuries sustained at the Front. It is the last place he expects to encounter murder. Fortunately he knows a former detective, a Belgian refugee, who has grown bored of retirement ... The first Hercule Poirot mystery, now published with a previously deleted chapter and introduced by Agatha Christie expert Dr John Curran.

Agatha Christie was born in Torquay in 1890 and became, quite simply, the best-selling novelist in history. Her first novel, The Mysterious Affair at Styles, written towards the end of the First World War, introduced us to Hercule Poirot, who was to become the most popular detective in crime fiction since Sherlock Holmes. She is known throughout the world as the Queen of Crime. Her books have sold over a billion copies in the English language and another billion in over 100 foreign countries. She is the author of 80 crime novels and short story collections, 19 plays, and six novels under the name of Mary Westmacott.