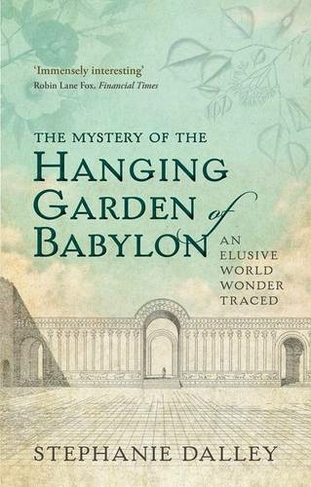 The Mystery of the Hanging Garden of Babylon: An Elusive World Wonder Traced

The Mystery of the Hanging Garden of Babylon is an exciting story of detection involving legends, expert decipherment of ancient texts, and a vivid description of a little-known civilization. Recognized in ancient times as one of the Seven Wonders of the World, the legendary Hanging Garden of Babylon and its location have long been steeped in mystery and puzzling myths. In this remarkable volume Stephanie Dalley, a world expert on ancient Babylonian language, exposes new evidence and clarifies all the known material about this enigmatic World Wonder. Placing the Garden within a tradition of royal patronage, Dalley describes how the decipherment of an original text and its link to sculpture in the British Museum has enabled her to pin down where and by which king the Garden was laid out, and to describe in detail what it looked like. Through this dramatic and fascinating reconstruction of the Garden, Dalley also follows its influence on later garden design. Unscrambling layer by layer the many stories that have built up around the Garden, including the parts played by Semiramis and Nebuchadnezzar, Dalley shows why this Garden deserves its place alongside the Pyramids and the Colossus of Rhodes as one of the most astonishing technical achievements of the ancient world. 90 black and white in-text illustrations and 8 colour plates

Stephanie Dalley is an Honorary Research Fellow at Somerville College, Oxford, a Member of Wolfson College, Oxford, and a Fellow of the Society of Antiquaries of London. With degrees in Assyriology from the Universities of Cambridge and London, her academic career has specialized in the study of ancient cuneiform texts and she has worked on archaeological excavations in Iraq, Turkey, Syria, and Jordan. She has written several books on the myths and culture of ancientMesopotamia, with special reference to their impact on later civilizations, many of which have been translated into Arabic, Italian, and Japanese. She lives in Oxford with her husband and maintains a large garden.