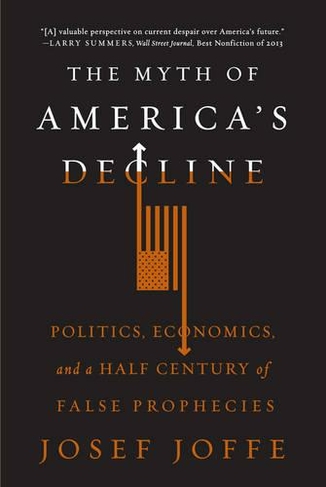 The Myth of America's Decline Politics, Economics, and a Half Century of False Prophecies

America-bashing predates America: French Enlightenment philosophies claimed that the colony was doomed and one critic reported that the colony's population was "astonishingly idiotic [and] enervated". As the United States became a superpower after the Second World War, a more virulent, politically charged form of declinism emerged amid hysteria that "the Russians are coming". It was followed by the European miracle, Japan's "Rising Sun" and now the looming Chinese behemoth. While declinism may delight the media and gloating Europeans eager to play up America's "has-been" status, the facts do not corroborate the contentions, as Josef Joffe demonstrates in this history of American declinism. He offers a highly provocative examination of how the US, for all its failings, continues to be a force of rejuvenation today. 32 illustrations

Publisher-editor of Die Zeit and the author of UEberpower, Josef Joffe was educated at Swarthmore College and Harvard University. A frequent contributor to Foreign Affairs and Foreign Policy, he is a founding board member of the American Interest. He is a Fellow at Stanford University's Hoover Institution and the Freeman-Spogli Institute for International Studies.