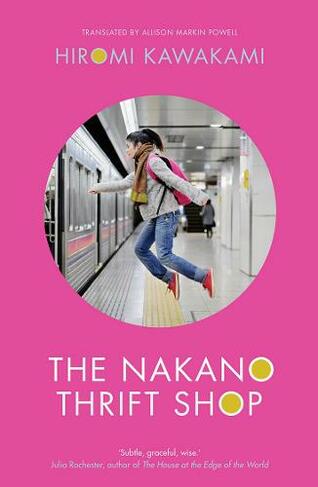 By Hiromi Kawakami (Author), Allison Markin Powell (Contributor)
Paperback
https://www.whsmith.co.uk/products/the-nakano-thrift-shop/hiromi-kawakami/allison-markin-powell/paperback/9781846276026-01-000.html £6.55 rrp £7.99 Save £1.44 (18%)
GBP
Availability
Currently unavailable. We don't know when or if this item will be back in stock
Share

Among the jumble of paperweights, plates, typewriters and general bric-a-brac in Mr Nakano's thrift store, there are treasures to be found. Each piece carries its own story of love and loss - or so it seems to Hitomi, when she takes a job there working behind the till. Nor are her fellow employees any less curious or weatherworn than the items they sell. There's the store's owner, Mr Nakano, an enigmatic ladies' man with several ex-wives; Sakiko, his sensuous, unreadable lover; his sister, Masayo, an artist whose free-spirited creations mask hidden sorrows. And finally there's Hitomi's fellow employee, Takeo, whose abrupt and taciturn manner Hitomi finds, to her consternation, increasingly disarming. A beguiling story of love found amid odds and ends, The Nakano Thrift Shop is a heart-warming and utterly charming novel from one of Japan's most celebrated contemporary novelists.

Born in 1959 in Tokyo, HIROMI KAWAKAMI is one of Japan's most popular contemporary novelists, famous for her literary, off-beat fiction. She made her debut with the short story 'God Bless You' in 1994, which received the Bunkamura Prix des Deux Magots and the Murasakishikibu Literature Award. Hebi wo fumu [Tread on a Snake] won the Akutagawa Prize in 1996 and Oboreru [Drowning] won both the Ito Sei Literature Award and Joryu Bungaku Sho (Woman Writers' Prize) in 2000. Her novel Manazuru won the 2011 Japan-U.S. Friendship Commission Prize.ALLISON MARKIN POWELL is a literary translator and editor in New York City. Her translations include works by Osamu Dazai, Fuminori Nakamura, and Kanako Nishi, and she was the guest editor for the first Japan issue of Words Without Borders. She maintains the database, Japanese Literature in English, at http://www.japaneseliteratureinenglish.com.

The Nakano Thrift Shop
The Nakano Thrift Shop
Hiromi Kawakami
Paperback
Currently unavailable. We don't know when or if this item will be back in stock
https://www.whsmith.co.uk/products/the-nakano-thrift-shop/hiromi-kawakami/allison-markin-powell/paperback/9781846276026.html £6.55 rrp £7.99 Save £1.44 (18%)
GBP