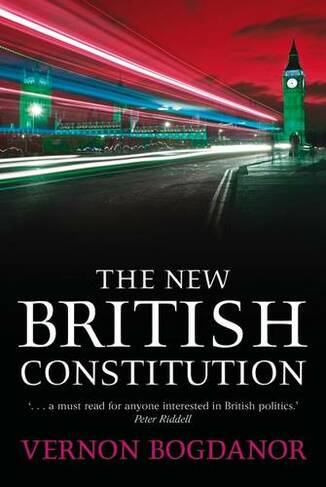 Also available on eBook for £25.79. Click here to purchase from Rakuten Kobo

The last decade has seen radical changes in the way we are governed. Reforms such as the Human Rights Act and devolution have led to the replacement of one constitutional order by another. This book is the first to describe and analyse Britain's new constitution, asking why it was that the old system, seemingly hallowed by time, came under challenge, and why it is being replaced. The Human Rights Act and the devolution legislation have the character of fundamental law. They in practice limit the rights of Westminster as a sovereign parliament, and establish a constitution which is quasi-federal in nature. The old constitution emphasised the sovereignty of Parliament. The new constitution, by contrast, emphasises the separation of powers, both territorially and at the centre of government. The aim of constitutional reformers has been to improve the quality of government. But the main weakness of the new constitution is that it does little to secure more popular involvement in politics. We are in the process of becoming a constitutional state, but not a popular constitutional state. The next phase of constitutional reform, therefore, is likely to involve the creation of new forms of democratic engagement, so that our constitutional forms come to be more congruent with the social and political forces of the age. The end-point of this piecemeal process might well be a fully codified or written constitution which declares that power stems not from the Queen-in Parliament, but, instead, as in so many constitutions, from 'We, the People'. The old British constitution was analysed by Bagehot and Dicey. In this book Vernon Bogdanor charts the significance of what is coming to replace it. The expenses scandal shows up grave defects in the British constitution. Vernon Bogdanor shows how the constitution can be reformed and the political system opened up in'The New British Constitution'. black & white illustrations

Vernon Bogdanor, CBE, Fellow of Brasenose College, is Professor of Government at Oxford University, Gresham Professor of Law, a Fellow of the British Academy and an Honorary Fellow of the Institute of Advanced Legal Studies. He has been an adviser to a number of governments, including those of the Czech Republic, Hungary, Kosovo, Israel and Slovakia. His books include The People and the Party System, Multi-Party Politics and the Constitution, Power and the People, and Devolution in the United Kingdom. He is a frequent contributor to TV, radio and the press and is a sometime special adviser to the House of Lords Select Committee on the European Communities (1982-83), and the House of Commons Public Service Committee. Most recently he was awarded the Sir Isiaiah Berlin prize for Lifetime Contribution to Political Studies by the Political Studies Association.