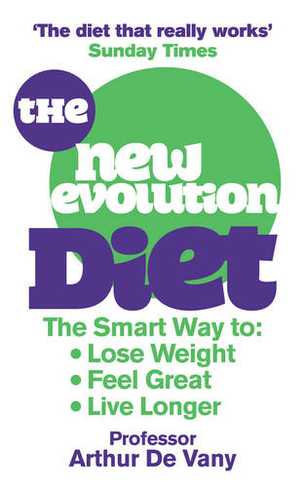 The simple way to lose weight, look younger and feel healthier - without restricting calories or excessive exercising The New Evolution Diet is Professor Arthur De Vany's astonishing lifestyle programme. Based on his decades-long study of weight loss, diet and health, it looks to our ancestors' lifestyle of eating a lot and moving a little. With fascinating insight and research, De Vany overturns our current guilt-ridden approach to diet and exercise, proving that we can lose pounds, look younger, beat diabetes and prevent heart disease simply by living on meat, fruit and vegetables, and embarking on only brief, intense periods of exercise. He then offers a clear plan, complete with menu ideas and exercise suggestions, so that you too can: *Lose weight in a matter of weeks *Say goodbye to endless exercise *Feel more energized *Give up command-and-control diets for good *Look younger and prevent premature ageing *Increase your sex drive *Achieve optimum health

Professor Arthur De Vany is a 72-year-old former athlete and highly respected scientist. Professor Emeritus at the University of California, he never works out for more than 90 minutes a week, never counts calories and frequently spends time doing absolutely nothing at all. Yet at 6' 1" he weights a mere 14 stone 9lbs (93 kilos), has less than 8% body fat and could easily pass for a man 20 years younger. His secret: The New Evolution Diet, which he has been following for the last 30 years and which has transformed not only his life but also the lives of thousands of followers around the globe.