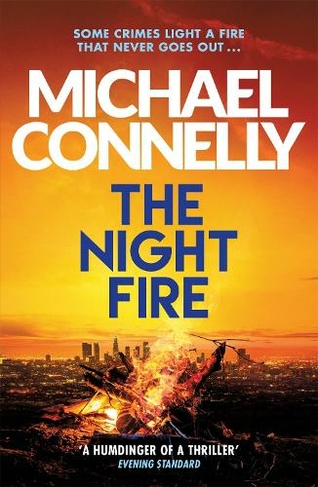 The Night Fire: The Brand New Ballard and Bosch Thriller

By Michael Connelly (Author)
Paperback
https://www.whsmith.co.uk/products/the-night-fire-the-brand-new-ballard-and-bosch-thriller/michael-connelly/paperback/9781409186069-03-000.html £5.99 rrp £8.99 Save £3.00 (33%)
GBP
Availability
In Stock
Free Delivery Available When You Spend £25 Or More
Details
Spend £25 on eligible products to receive free standard delivery to home or free next working day click and collect to store
Share

SOME CRIMES LIGHT A FIRE THAT NEVER GOES OUT...'Connelly is at the top of his game - a humdinger of a thriller' Evening Standard, Books of the Year 'Masterfully structured, hugely entertaining and satisfying' Daily Express 'A superb story that never once draws breath' Daily Mail * * * * * A JUDGE MURDERED IN A CITY PARK Mickey Haller, the Lincoln Lawyer, defends the man accused. A HOMELESS PERSON BURNED ALIVE Detective Renee Ballard catches the case on the LAPD's notorious graveyard shift. AN UNSOLVED HOMICIDE FROM A LIFETIME AGO Harry Bosch is left a missing case file by his mentor who passed away. He was the man who taught Bosch that everybody counts, or nobody counts. Why did he keep the case all these years? To find the truth - or bury it? IN L.A. CRIME NEVER SLEEPS But in Ballard, Bosch and Haller: the fire always burns. Will it light the way - or leave their lives in ashes? * * * * * CRIME DOESN'T COME BETTER THAN CONNELLY. 'One of the world's greatest crime writers' Daily Mail 'The pre-eminent detective novelist of his generation' Ian Rankin 'Crime thriller writing of the highest order' Guardian 'A superb natural storyteller' Lee Child 'A master' Stephen King 'A genius' Independent on Sunday 'A terrific writer with pace, style and humanity to spare' The Times 'America's greatest living crime writer' Daily Express 'One of the great storytellers of crime fiction' Sunday Telegraph 'Justly regarded as one of the world's finest crime writers' Mail On Sunday 'No one writes a better modern thriller than Connelly' Evening Standard

MICHAEL CONNELLY is the author of thirty-two previous novels, including the #1 New York Times bestsellers Dark Sacred Night, Two Kinds of Truth, and The Late Show. His books, which include the Harry Bosch series and the Lincoln Lawyer series, have sold more than seventy-four million copies worldwide. Connelly is a former newspaper reporter who has won numerous awards for his journalism and his novels. He is the executive producer of Bosch, starring Titus Welliver, and the creator and host of the podcast Murder Book. He spends his time in California and Florida.To find out more, visit Michael's website or follow him on Twitter or Facebook. www.michaelconnelly.comf/MichaelConnellyBookst@Connellybooks