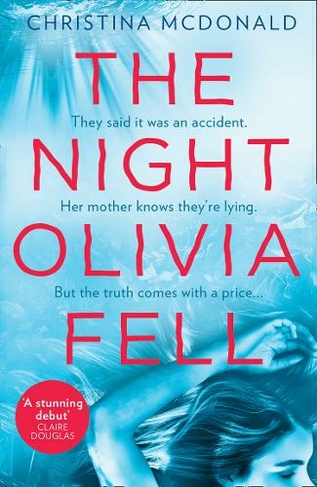 By Christina McDonald (Author)
Paperback
https://www.whsmith.co.uk/products/the-night-olivia-fell/christina-mcdonald/paperback/9780008307660-12-000.html £6.55 rrp £7.99 Save £1.44 (18%)
GBP
Availability
In Stock
Free Delivery Available When You Spend £25 Or More
Details
Spend £25 On Eligible Products To Receive Free Standard Delivery To You Home Or Free Next Working Day Click And Collect To Store
Share

'A stunning debut that kept me guessing until the final, heartbreaking twist' Claire Douglas 'Addictive, twisty and beautifully written' Alice Feeney * * * * * A fast-paced and action-packed thriller, full of twists and turns you won't see coming. It is the most gripping suspense mystery you'll read this year. They said it was an accident. Her mother knows they're lying. But the truth comes with a price... IT'S EVERY PARENT'S WORST NIGHTMARE. Abi Knight is startled awake in the middle of the night to a ringing phone and devastating news - her teenage daughter, Olivia, has been in a terrible accident. Abi is told that Olivia slipped and fell from a bridge into the icy water below, and now she lies silent, dependent on life support. But then Abi sees the angry bruises around Olivia's wrists and learns that her sensible daughter is in fact three months pregnant . . . WOULD YOU BELIEVE IT IF THEY TOLD YOU IT WAS AN ACCIDENT? * * * * * What authors are saying about The Night Olivia Fell: 'Addictive, twisty and beautifully written, an emotional roller coaster of a thriller that kept me guessing until the very end' Alice Feeney, international bestselling author of Sometimes I Lie 'A stunning debut that kept me guessing until the final, heartbreaking twist' Claire Douglas, Sunday Times bestselling author of Do Not Disturb 'I was absolutely hooked; it was such an emotional read that I was broken by the end. Heartbreaking and thrilling at the same time' Jenny Blackhurst, author of How I Lost You The Night Olivia Fell is leaving readers gripped! 'This is a corker of a book that kept me reading late into the night. Highly recommend' 'A brilliant read...gripped me from the start' 'An absolutely brilliant premise' 'Brilliant book, highly recommended for those that want to be taken on a roller coaster of emotion by a supremely talented author'

Christina McDonald worked as a freelance journalist for several newspapers in Ireland and Seattle, including The Sunday Times, Dublin, The Connacht Tribune, Galway, The Galway Independent, The Seattle Post Intelligencer, and Colures Magazine. She later moved to London and started a digital copywriting company where she worked as a consultant and writer for brands such as British Telecom (BT), Travelex, Wood Mackenzie, Pearson Publishing, TUI Travel, Expedia and USAToday.com. She now lives in London with her husband, two sons and their golden retriever. The Night Olivia Fell is her debut novel.