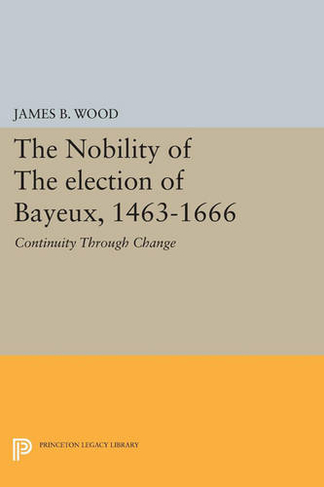 The Nobility of the Election of Bayeux, 1463-1666 Continuity Through Change

Reconstructing the collective experience of an entire provincial nobility over a period of more than two centuries, James Wood finds current theories about the early modernFrench nobility inadequate. Concentrating on socio-economic structures and changes, he analyzes the composition and way of life of all the nobles--poor and prosperous, obscure and notable--who lived in the election of Bayeux between the mid-fifteenth and mid-seventeenth centuries. Combining a regional historical perspective with the methods of quantitative social history, Professor Wood demonstrates the broader significance of his findings for general historical interpretations of the nobility and of early modern France as well. Originally published in 1980. The Princeton Legacy Library uses the latest print-on-demand technology to again make available previously out-of-print books from the distinguished backlist of Princeton University Press. These editions preserve the original texts of these important books while presenting them in durable paperback and hardcover editions. The goal of the Princeton Legacy Library is to vastly increase access to the rich scholarly heritage found in the thousands of books published by Princeton University Press since its founding in 1905.