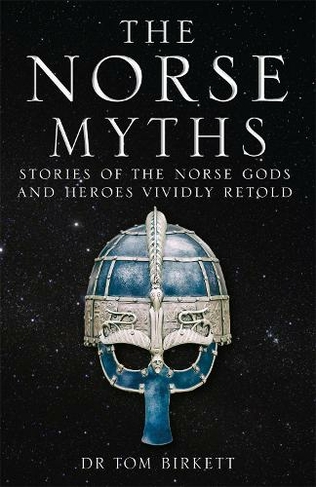 The Norse Myths: Stories of The Norse Gods and Heroes Vividly Retold

The great Norse Myths are among the most dramatic and unforgettable stories in all human history. These fascinating, fantastical tales have inspired centuries of art, culture and literature, including the storytelling of Tolkien, Neil Gaiman, George R. R. Martin's Game of Thrones, Wagner's Ring Cycle and Marvel Comics. The Norse Myths takes us on a thrilling journey through the Norse cosmos, from the creation of the world to Ragnarok, the final world-destroying conflict; via the Nine Worlds, and the exploits of the mighty gods and goddesses - mystical Odin, malicious Loki, mighty Thor and more - and their quarrel with the giants. Bringing to life the magical world of monsters and mythical creatures, The Norse Myths also introduces the adventures of humankind: folk heroes and tricksters; Sigmund's great battle in the Volsung Saga; the exploits of Kings and Princes; Viking exploration and settlement of new lands including Iceland, Greenland, America; and Viking life in the Mediterranean and the East. As well as a treasure trove of these epic stories of heroism and cruelty, squabbles and seductions, The Norse Myths is a comprehensive study of their origins, survival and interpretations - as academically important as it is exhilarating.

Dr Tom Birkett is a lecturer in Old English and Old Norse at University College Cork, Ireland. He spent a lot of time running round castles as a child, moved to Norway for a year in pursuit of the Vikings, and hasn't looked back since. He is author of Reading the Runes (Routledge, 2017), and editor of Translating Early Medieval Poetry (Boydell, 2017) and Reimagining the Vikings (MIP, forthcoming) and runs the World-Tree teaching archive. He teaches courses on Norse myth, medieval literature and Old English language at UCC and occasionally takes time out to sail with the crew of a reconstructed Viking ship.