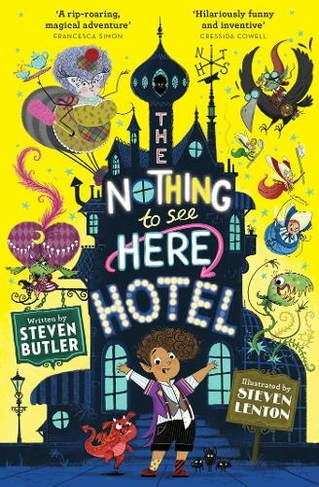 'This book is so good you won't blunking believe it!' Tom Fletcher 'Hilariously funny and inventive, and I love the extraordinary creatures and the one thirty-sixth troll protagonist...' Cressida Cowell 'A rip-roaring, swashbuckling, amazerous magical adventure. Comedy Gold.' Francesca Simon 'This hotel gets five stars from me' Liz Pichon 'A splundishly swashbungling tale of trolls, goblins and other bonejangling creatures. Put on your wellies and plunge into the strangest hotel you will ever encounter. This is a hotel I hope I never find! Wonderfully, disgustingly funny.' Jeremy Strong 'What a fun hotel! Book me in immediately!' Kaye Umansky Welcome to The Nothing to See Here Hotel! A hotel for magical creatures, where weird is normal for Frankie Banister and his parents who run the hotel. When a goblin messenger arrives at The Nothing to See Here Hotel, announcing the imminent arrival of the goblin prince Grogbah, Frankie and his family rush into action to get ready for their important guest. But it soon becomes obvious that the Banister family are going to have their work cut out with the demanding prince and his never-ending entourage, especially when it turns out the rude little prince is hiding a secret... The first book in a fabulously funny series by bestselling author Steven Butler, with a host of whacky characters brought to life with illustration from the wonderful Steven Lenton! b-w line throughout

Steven Butler grew up in Kent, but now lives in London. He is the author of the bestselling The Diary Of Dennis The Menace and The Wrong Pong fiction series. As well as writing the hit 2015 World Book Day title, World Menace Day, Steven also is the regular host of World Book Day's The Biggest Book Show on Earth which takes place every year to celebrate the event. Steven is also a successful performer and voice artist. Steven's first novel, The Wrong Pong, was shortlisted for the prestigious Roald Dahl Funny Prize in 2009. Steven Lenton hails from Cheshire and now works from his studio in Soho, London creating an array of charming characters for his picture books. Best known for illustrating the bestselling Shifty McGifty series written by Tracey Corderoy, Steven has illustrated many lovely book as well as writing and illustrating his own stories.