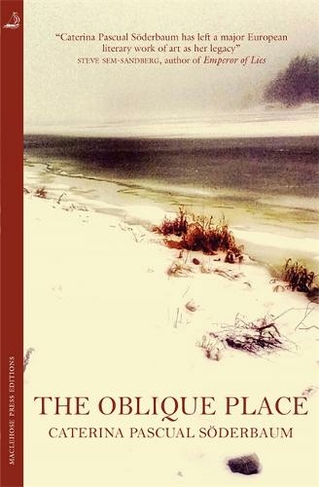 "Caterina Pascual Soederbaum has left a major European literary work of art as her legacy" STEVE SEM-SANDBERG, author of Emperor of Lies The Oblique Place is a captivating journey of the imagination, a prize-winning novel that probes the ruinous legacies of Fascist Europe in the twentieth century. The discovery of photographs in an album - of her Spanish grandfather who joined Hitler's Wehrmacht and her father in the uniform of Franco's army- leads Caterina Pascual Soederbaum to explore her family's links to some of the most abhorrent passages of twentieth-century history. Her mother turns out to be related to Kristina Soederbaum, a celebrated Swedish film star of the Third Reich, adored by Goebbels. She travels with husband and child to the shores of the idyllic Attersee in Austria, where the officers of the extermination camps spent their holidays. The journey continues from Schloss Hartheim, where the staff of the Nazi euthanasia programme forgot, with the help of alcohol and sex, the horrors that took place there, to the Villa Saint-Jean, where malnourished children from France's internment camps were sent to recover. This imaginative rediscovery of her own family's disturbing history is fused with vividly captured episodes from other lives and times, and the threads of evil that she lays bare are described in language so beautiful, so subtle and painterly, that her odyssey is at once shattering and mesmerising. Translated from the Swedish by Frank Perry

Caterina Pascual Soederbaum, 1962-2015, lived between Sweden and Spain and worked as a translator of Swedish literature into Spanish. Her first book, a collection of short stories entitled Sonetten om andningen (The Sonett on Breathing) (Lejd foerlag, 2002), won Sweden's Catapult Prize for best first work of fiction. The Oblique Place was to be her last novel, and was awarded the prestigious Sveriges Radios Novel Prize posthumously.