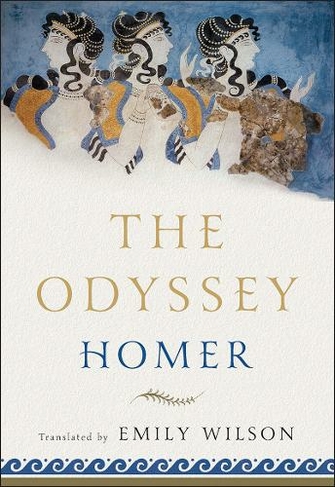 By , Emily Wilson (Contributor)
Paperback
https://www.whsmith.co.uk/products/the-odyssey/emily-wilson/paperback/9780393356250-12-000.html £12.87 rrp £13.99 Save £1.12 (8%)
GBP
Availability
In Stock
Free Delivery Available When You Spend £25 Or More
Details
Spend £25 On Products To Receive Free Standard Delivery To Your Home Or Free Next Working Day Click And Collect To Store
Share

The first great adventure story in the Western canon, The Odyssey is a poem about violence and the aftermath of war; about wealth, poverty and power; about marriage, family and identity; and about travellers, hospitality and the changing meanings of home in a strange world. This vivid new translation-the first by a woman-matches the number of lines in the Greek original, striding at Homer's sprightly pace. Emily Wilson employs elemental, resonant language and an iambic pentameter to produce a translation with an enchanting "rhythm and rumble" that avoids proclaiming its own grandeur. An engrossing tale told in a compelling new voice that allows contemporary readers to luxuriate in Homer's descriptions and similes and to thrill at the tension and excitement of its hero's adventures, Wilson recaptures what is "epic" about this wellspring of world literature. 3 maps

Emily Wilson is professor of classical studies and graduate chair of the Program in Comparative Literature and Literary Theory at the University of Pennsylvania. Wilson attended Oxford University (Balliol College, B.A., and Corpus Christi College, M.Phil.) and Yale University (Ph.D.). In 2006, she was named a Fellow of the American Academy in Rome in Renaissance and Early Modern scholarship, and in 2019 was named a MacArthur Fellow by the John D. and Catherine T. MacArthur Foundation. In addition to The Odyssey, she has published translations of Euripides, Sophocles, and Seneca. Among her other books are Mocked with Death: Tragic Overliving from Sophocles to Milton; The Death of Socrates: Hero, Villain, Chatterbox, Saint; The Greatest Empire: A Life of Seneca; and Faithful, a book about translation. Wilson is an editor of The Norton Anthology of World Literature and an advisory editor of the Norton Library.