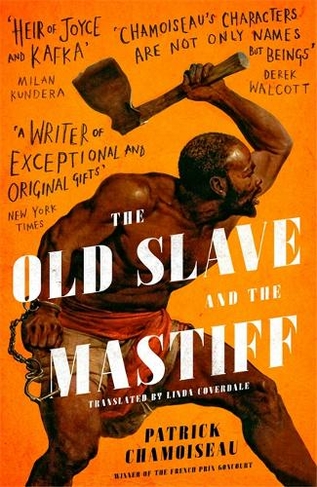 The Old Slave and the Mastiff: The gripping story of a plantation slave's desperate escape

By Patrick Chamoiseau (Author)
Hardback
https://www.whsmith.co.uk/products/the-old-slave-and-the-mastiff-the-gripping-story-of-a-plantation-slaves-desperate-escape/patrick-chamoiseau/hardback/9780349700465-12-000.html £11.99 rrp £14.99 Save £3.00 (20%)
GBP
Availability
In Stock
Free Delivery Available When You Spend £25 Or More
Details
Spend £25 On Eligible Products To Recieve Free Standard Delivery To You Home Or Free Next Working Day Click And Collect To Store
Share

NEW YORK TIMES EDITOR'S CHOICE AND BOOKS OF THE YEAR 2018 PUBLISHERS WEEKLY BEST BOOKS OF 2018 CHICAGO REVIEW OF BOOKS 'MOST ANTICIPATED FICTION BOOKS OF 2018' '(A) beautiful book, by a writer who's as original as any I've read all year' Sam Sacks , Wall Street Journal 'My favorite Caribbean writer' Junot Diaz 'A cloudburst of a novel, swift and compressed- but every page pulses, blood-warm. . . . The prose is so electrifying . . . that, on more than one occasion, I found myself stopping to rub my eyes in disbelief' Parul Seghal, The New York Times 'Haunting, beautiful, and necessary' Buzzfeed 'Heir of Joyce and Kafka' Milan Kundera * * * A profoundly unsettling story of a plantation slave's desperate escape into a rainforest beyond human control, with his master and a ferocious dog on his heels. This flight to freedom takes them on a journey that will transform them all, as the overwhelming physical presence of the forest and its dense primeval wilderness reshapes reality and time itself. In the darkness, the old man grapples with the spirits of all those who have gone before him; the knowledge that the past is always with us, and the injustice that can cry out from beyond the grave. From a Prix Goncourt writer hailed by Milan Kundera as the "heir of Joyce and Kafka," The Old Slave and the Mastiff fearlessly portrays the demonic cruelties of the slave trade and its human costs -- a wise, loving tribute to the Creole culture of Martinique, and a vividly told journey into the heart of Caribbean history and human endurance.

Patrick Chamoiseau is a French author from Martinique known for his work in the creolite movement.Chamoiseau was born on December 3, 1953 in Fort-de-France, Martinique, where he currently resides. After he studied law in Paris he returned to Martinique inspired by Edouard Glissant to take a close interest in Creole culture. Chamoiseau is the author of a historical work on the Antilles under the reign of Napoleon Bonaparte and several non-fiction books which include Eloge de la creolite (In Praise of Creoleness), co-authored with Jean Bernabe and Raphael Confiant. Awarded the Prix Carbet (1990) for Antan d'enfance. His novel Texaco was awarded the Prix Goncourt in 1992, and was chosen as a New York Times Notable Book of the Year. It has been described as "a masterpiece, the work of a genius, a novel that deserves to be known as much as Fanon's The Wretched of the Earthand Cesaire's Return to My Native Land".