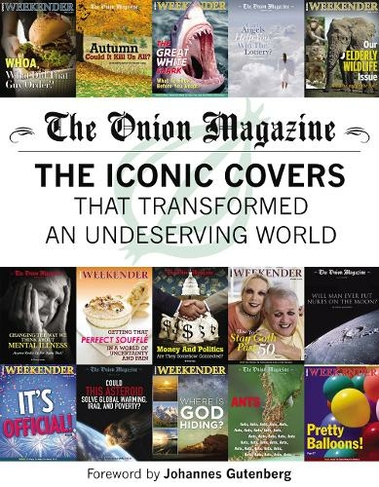 The Onion Magazine The Iconic Covers That Transformed an Undeserving World

Finally, the book that your coffee table has been waiting for: the once-in-a-lifetime (so far) collection of the greatest covers from the Onion's Sunday Magazine. Carefully selected by a team of high-ranking Onion editors, these full-colour replicas of more than 200 covers represent the pinnacle of insight from the most respected newspaper in the world. Highlighting such pressing issues as why Tommy Lee Jones has kept a little boy's name, whether bugs are mad at us, and how to get your baby into the best incubator, these covers remind us why nothing is more important to the survival of America than investigative journalism - and which Eastern religions are best for your abs. 262 4/c magazine covers

Since its founding by a Prussian tuber farmer in 1756, The Onion has attracted millions of loyal fans drawn to its fearless reporting and scathing commentary on world events, human behavior, and journalistic convention, and it has expanded into an omnipotent news empire, with Webby Award-winning TheOnion.com, Clickhole, and multiple bestselling books, including Our Dumb Century (1999), Our Dumb World (2007), andThe Onion Book of Known Knowledge (2012). Its home offices are in Chicago.