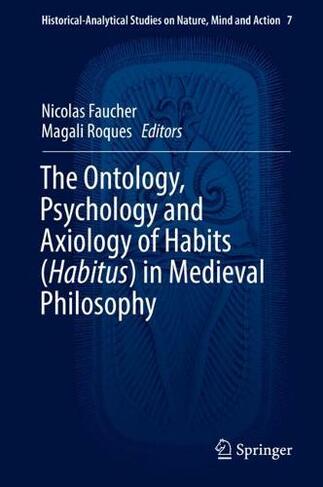 The Ontology, Psychology and Axiology of Habits (Habitus) in Medieval Philosophy 7 1st ed. 2018

This book features 20 essays that explore how Latin medieval philosophers and theologians from Anselm to Buridan conceived of habitus, as well as detailed studies of the use of the concept by Augustine and of the reception of the medieval doctrines of habitus in Suarez and Descartes. Habitus are defined as stable dispositions to act or think in a certain way. This definition was passed down to the medieval thinkers from Aristotle and, to a lesser extent, Augustine, and played a key role in many of the philosophical and theological developments of the time. Written by leading experts in medieval and modern philosophy, the book offers a historical overview that examines the topic in light of recent advances in medieval cognitive psychology and medieval moral theory. Coverage includes such topics as the metaphysics of the soul, the definition of virtue and vice, and the epistemology of self-knowledge. The book also contains an introduction that is the first attempt at a comprehensive survey of the nature and function of habitus in medieval thought. The material will appeal to a wide audience of historians of philosophy and contemporary philosophers. It is relevant as much to the historian of ancient philosophy who wants to track the historical reception of Aristotelian ideas as it is to historians of modern philosophy who would like to study the progressive disappearance of the term "habitus" in the early modern period and the concepts that were substituted for it. In addition, the volume will also be of interest to contemporary philosophers open to historical perspectives in order to renew current trends in cognitive psychology, virtue epistemology, and virtue ethics. 1 Illustrations, black and white; IX, 413 p. 1 illus.

Magali Roques currently holds a postdoctoral fellowship from Deutsche Forschungsgemeinschaft (DFG) at the University of Hamburg and is an associate researcher at the Centre d'Etudes Superieures de la Renaissance. She received her PhD in December 2012 from the Universite Francois-Rabelais de Tours, and held several postdoctoral positions in Canada, Switzerland, and Germany. Her research interests focus on fourteenth-century philosophy, especially Ockham and his contemporaries. Her work deals with connections between philosophy of language and metaphysics.Nicolas Faucher is a postdoctoral researcher in medieval philosophy at the Academy of Finland's Centre of Excellence in Reason and Religious Recognition, and an associate member of the Laboratoire d'Etudes sur les Monotheismes (CNRS, France). He received his PhD in December 2015 from the Ecole pratique des hautes etudes (Paris) and the Universita degli Studi di Bari - Aldo Moro. His research focuses on the psychological and epistemological aspects of the habitus and act of faith in the 13th and 14th centuries, as well as on voluntary belief in general and the links between rhetoric and belief.