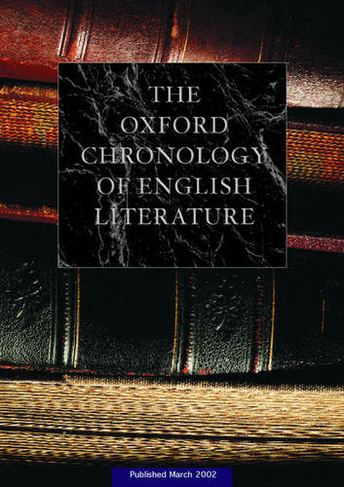 The Oxford Chronology of English Literature

The aim of The Oxford Chronology of English Literature is to provide a wide range of users - from scholars and students to librarians and book collectors - with a digest of the printed record of English literature 1474-2000. The aim is to enable such users to view a generous sampling of printed publications in time and in relation to other works published in the same year, or in a sequence of years. It is not intended to be a technical bibliography and does not claim to embody original bibliographical research; it is rather an extensive, carefully selected, chronologically organized checklist of significant and representative works arranged by year of imprint or of actual publication where this differs. Its value lies both in the number and range of titles selected and in the bringing together of information on individual titles from a large number of sources. The work, which is published in two volumes, contains nearly 30,000 titles from some 4,000 authors, and extensive author and titles indexes. The Chronology's primary focus is English literature, understood as works originally written in English by British authors published in Britain, though exceptions have been made for authors born elsewhere (e.g. Henry James) who made their home in Britain or some colonial authors who published principally with British publishing houses. Though works of the imagination predominate, 'non-literary' works (e.g. in religion, philosophy, economics, science, or law) are also included. The Chronology is distinctive both in the range of authors and works covered and in the depth of detail it offers. The format of each title record enables users quickly and easily to check such specifics as: subtitles of works; format (i.e. number of volumes); publishers/imprint details; place of publication; whether a work was published anonymously or pseudonymously; serialization details for many works of fiction; where and when dramatic works were first performed; or if a work was illustrated, and who by. In many entries, additional annotation is provided (especially where this is relevant to an understanding of a work's composition or publishing history): for example, it may be useful, or merely interesting, for users to know that Sarah Fuller Adams's Hymns and Anthems (1841) contains the well-known `Nearer, my God, to Thee', or that Henry Brougham's novel Albert Lunel (1844) was written as a memorial to his daughter; it is certainly important to know that E. M. Forster's homosexual novel Maurice, though published in 1971, was written in 1914. In this case, both dates are significant for different and opposite reasons. The works covered in the Chronology generally fall into the following broad categories: * Fiction [novels, novellas, short-story collections, anthologies, selected juvenile fiction] * Poetry [individual works, single-author collections, anthologies] * Drama * Literary Scholarship [editions of English texts, editions of classical and foreign texts, editions of letters, dictionaries and other reference works, critical studies] * Non-Fiction [essays, travel and exploration, literary memoirs, biographical studies, philosophical and religious works, historiography, economics] Whilst the traditional canon of English literature is at the core of the Chronology, an inclusive and pluralistic approach has been attempted throughout. The importance of women authors in every period is fully reflected. Attention has also been paid to Irish, Scottish, and Welsh authors who wrote/write in English; to English regional writers; and to working-class texts. The Chronology has also been liberal in its definitions of literature and has admitted large numbers of works (far more than its predecessor, the Annals of English Literature) whose popularity serves to exemplify contemporary taste or which have contributed to the development of a particular popular genre (for example, detective fiction).

Michael Cox works as senior Commissioning Editor on reference books at Oxford University Press. He is the author of the standard biography of the scholar M. R. James and has edited a selection of James's ghost stories for the Oxford World's Classics series. He has also edited or co-edited several Oxford anthologies of fiction.