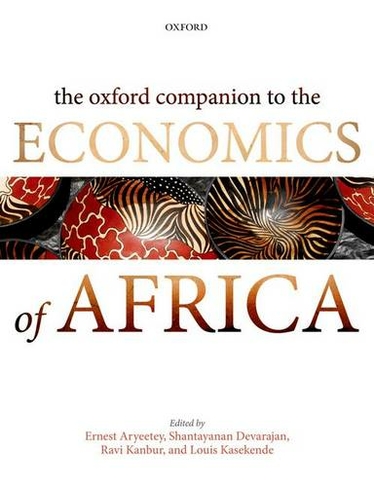 The Oxford Companion to the Economics of Africa

Africa is a diverse continent. But is there a pattern to the diversity? Are there commonalities across the countries? And what does economics tell us about the diversity and the commonalities? The Oxford Companion to the Economics of Africa is a definitive and comprehensive account of the key issues and topics affecting Africa's ability to grow and develop. It includes 53 thematic and 48 country perspectives by a veritable who's who of more than 100 leading economic analysts of Africa. The contributors include: bright new African researchers based in Africa; renowned academics from the top Universities in Africa, Europe and North America; present and past Chief Economists of the African Development Bank; present and past Chief Economists for Africa of the World Bank; present and past Chief Economists of the World Bank; African Central Bank governors and finance ministers; and four Nobel Laureates in Economics. 43 Figures, 38 Tables

Prior to his appointment as Vice Chancellor Ernest Aryeetey was a Senior Fellow and Director of the Africa Growth Initiative at the Brookings Institution, Washington, D.C. He was earlier Director of the Institute of Statistical, Social and Economic Research (ISSER) of the University of Ghana from 2003-2010. His research focuses on the economics of development and the role of institutions in development, regional integration, economic reforms, financial systems insupport of development and small enterprise development. He is well known for his work on informal finance and microfinance in Africa. He has published with leading development journals and publishers. Among his publications are Financial Integration and Development in Sub-Saharan Africa (Routledge1998) and Economic Reforms in Ghana: the Miracle and the Mirage (James Currey 2000).Since joining the World Bank in 1991, Shantayanan Devarajan has been a Principal Economist and Research Manager for Public Economics in the Development Research Group, and the Chief Economist of the Human Development Network, and of the South Asia Region. He was the director of the World Development Report 2004: Making Services Work for Poor People. Before 1991, he was on the faculty of Harvard University's John F. Kennedy School of Government. The author or co-author of over 100 publications,Mr Devarajan's research covers public economics, trade policy, natural resources and the environment, and general equilibrium modeling of developing countries. Born in Sri Lanka, Mr Devarajan received his B.A. in mathematics from Princeton University and his Ph.D. in economics from the University ofCalifornia, Berkeley.Ravi Kanbur holds an appointment tenured both in the Charles H. Dyson of Applied Economics and Management in the College of Agriculture and Life Sciences, and in the Department of Economics in the College of Arts and Sciences. He has taught at the Universities of Oxford, Cambridge, Essex, Warwick, Princeton and Columbia. Ravi Kanbur has served on the staff of the World Bank, as Economic Adviser, Senior Economic Adviser, Resident Representative in Ghana, Chief Economist of the African Region ofthe World Bank, and Principal Adviser to the Chief Economist of the World Bank. He has also served as Director of the World Bank's World Development Report. His vita lists over 175 publications and he has published in the leading economics journals such as American Economic Review, and the Journal ofPolitical Economy. The honors he has received include the Quality of Research Discovery Award of the American Agricultural Economics Association and an Honorary Professorship at the University of Warwick.Previously Louis Kasekende was Chief Economist at the African Development Bank and Executive Director at the World Bank for Africa Group 1, including 22 countries mostly from Anglophone Sub-Saharan Africa. Prior to joining the World Bank, he served as at the Bank of Uganda as Deputy Governor (1999-2002), Executive Director of Research and Policy (1994-1999) and Director of the Research Department at the Bank of Uganda from (1992-1994). After completing his studies at Makerere University, hetutored at the University before proceeding for his post-graduate studies at the University of Manchester. During his studies at University of Manchester, he tutored in the department of Econometrics. Between 1991 and 1996 he lectured part-time in the MA Program in Economic Policy and Planning atMakerere University. His main area of research interest is macroeconomic policies implemented by African countries to recover from the lost decade of the 1980s.