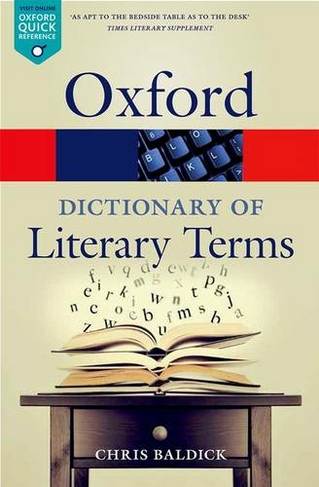 The bestselling Oxford Dictionary of Literary Terms provides clear and concise definitions of the most troublesome literary terms, from abjection to zeugma. It is an essential reference tool for students of literature in any language. Now expanded and in its fourth edition, it includes increased coverage of new terms from modern critical and theoretical movements, such as feminism, schools of American poetry, Spanish verse forms, life writing, and crime fiction. It includes extensive coverage of traditional drama, versification, rhetoric, and literary history, as well as updated and extended advice on recommended further reading and a pronunciation guide to more than 200 terms. Completely revised and updated, this edition also features brand-new entries on terms such as distant reading, graphic novels, middle generation, and misery memoir. Many new bibliographies have been added to entries and recommended web links are available via a companion website.

Chris Baldick is Professor of English at Goldsmiths, University of London. He edited The Oxford Book of Gothic Tales (1992), and is the author of The Oxford English Literary History, Volume 10 (1910-1940): The Modern Movement (2004), In Frankenstein's Shadow (1987), Criticism and Literary Theory 1890 to the Present (1996), and other works of literary history. He has edited, with Rob Morrison, Tales of Terror from Blackwood'sMagazine, and The Vampyre and Other Tales of the Macabre, and has written an introduction to Charles Maturin's Melmoth the Wanderer (all available in the Oxford World's Classics series).