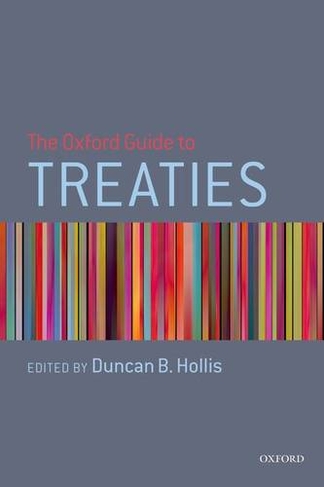 The Oxford Guide to Treaties

From trade relations to greenhouse gases, from shipwrecks to cybercrime, treaties structure the rights and obligations of states, international organizations, and individuals. For centuries, treaties have regulated relations among nation states. Today, they are the dominant source of international law. Thus, being adept with treaties and international agreements is an indispensable skill for anyone engaged in international relations, including international lawyers, diplomats, international organization officials, and representatives of non-governmental organizations. The Oxford Guide to Treaties provides a comprehensive guide to treaties, shedding light on the rules and practices surrounding the making, interpretation, and operation of these instruments. Leading experts provide essays designed to introduce the law of treaties and offer practical insights into how treaties actually work. Foundational issues are covered, including what treaties are and when they should be used, alongside detailed analyses of treaty formation, application, interpretation, and exit. Special issues associated with treaties involving the European Union and other international organizations are also addressed. These scholarly treatments are complimented by a set of model treaty clauses. Real examples illustrate the approaches treaty-makers can take on topics such as entry into force, languages, reservations, and amendments. The Oxford Guide to Treaties thus provides an authoritative reference point for anyone studying or involved in the creation or interpretation of treaties or other forms of international agreement.

Duncan B. Hollis is Professor of Law and Associate Dean for Academic Affairs at Temple University's Beasley School of Law. Professor Hollis's scholarship focuses on treaties and other forms of international agreement, examining the formation, interpretation, and application of treaties and political commitments in international, comparative and constitutional contexts. He co-edited and co-authored National Treaty Law & Practice (2005) and his writings haveappeared in journals such as the American Journal of International Law, Harvard International Law Journal, Texas Law Review, and the Virginia Journal of International Law. Prior to joining the Temple faculty, Professor Hollis served from 1998 to 2004 in the Office of the Legal Adviser at the U.S. Department ofState. During his tenure at the State Department, he worked for several years as the attorney-adviser for treaty affairs, addressing legal and constitutional issues associated with U.S. treaties.