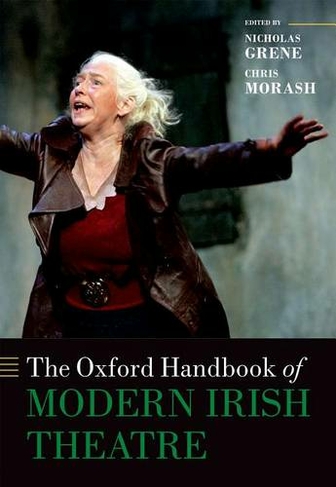 Also available on eBook for £93.59. Click here to purchase from Rakuten Kobo

The Oxford Handbook of Modern Irish Theatre provides the single most comprehensive survey of the field to be found in a single volume. Drawing on more than forty contributors from around the world, the book addresses a full range of topics relating to modern Irish theatre from the late nineteenth-century theatre to the most recent works of postdramatic devised theatre. Ireland has long had an importance in the world of theatre out of all proportion to the size of the country, and has been home to four Nobel Laureates (Yeats, Shaw, and Beckett; Seamus Heaney, while primarily a poet, also wrote for the stage). This collection begins with the influence of melodrama, looks at arguably the first modern Irish playwright, Oscar Wilde, before moving into a series of considerations of the Abbey Theatre, and Irish modernism. Arranged chronologically, it explores areas such as women in theatre, Irish-language theatre, and alternative theatres, before reaching the major writers of more recent Irish theatre, including Brian Friel and Tom Murphy, and their successors. There are also individual chapters focusing on Beckett and Shaw, as well as a series of chapters looking at design, acting and theatre architecture. The book concludes with an extended survey of the critical literature on the field. In each chapter, the author does not simply rehearse accepted wisdom; all of the authors push the boundaries of their respective fields, so that each chapter is a significant contribution to scholarship in its own right. 58 black-and-white illustrations

Nicholas Grene is Professor of English in Trinity College, Dublin. He has published extensively on a range of topics, including Irish theatre, Shakespeare, Yeats, Shaw and Indian literature in English. His impact on Irish theatre research extends back to Synge: A Critical Study of the Plays (1975); his study of modern Irish theatre, The Politics of Irish Drama (1999) has been highly influential, and his most recent book is Home on theStage (2014). He is a founding director of both the Synge Summer School and the Irish Theatre Diaspora Project. He is a Member of the Royal Irish Academy.Chris Morash is Seamus Heaney Professor of Irish Writing in Trinity College, Dublin; he was previously Professor of English in Maynooth University. Born in Canada, he has published widely on Irish literature and cultural history, including Writing the Irish Famine (1996), A History of Irish Theatre 1601-2000 (2002), A History of the Media in Ireland (2009), and Mapping Irish Theatre (with Shaun Richards, 2013). His History of Irish Theatre wonthe Theatre Book Prize in 2003, and is widely regarded as the standard history in the field. He is a Member of the Royal Irish Academy.