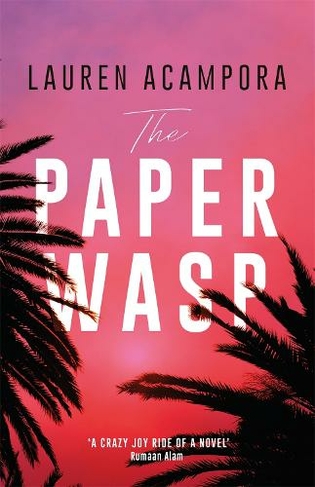 By Lauren Acampora (Author)
Paperback
https://www.whsmith.co.uk/products/the-paper-wasp/lauren-acampora/paperback/9781529401028-12-000.html £7.37 rrp £8.99 Save £1.62 (18%)
GBP
Availability
In Stock
Free Delivery Available When You Spend £25 Or More
Details
Spend £25 On Products To Receive Free Standard Delivery To Your Home Or Free Next Working Day Click And Collect To Store
Share

'Acampora is an original' Jay McInerney, author of Bright Lights, Big City An electrifying debut novel of two women's friendship, a haunting obsession and twisted ambition, set against the feverish backdrop of contemporary Hollywood. Abby Graven is a dreamer. She dreams her way through her small, lonely life - hiding back at her parents, working at the grocery store. At night, she collects tabloid clippings that taunt her with Elise - her best friend, now Hollywood's hot new starlet. When a school reunion throws Elise in her path, Abby seizes her chance. With feverish certainty, she boards a one-way flight to LA to become Elise's assistant and enters her gauzy realm of film sets and glamorous actors. But behind Elise's glossy magazine veneer, she is drowning in Hollywood's vicious social cycle. Ever the devoted friend, Abby conceals her own burning desire for greatness. For she is smarter than Elise. More talented. A true artist. And as she edges closer to her own ambitions, Abby can see only one way to make her dream come true. Propelled by seductive, unstoppable force, The Paper Wasp slashes through the dark side of Hollywood and the treacherous intimacies of female friendship, pursuing a heroine of blazing artistic vision and blinding drive.

Lauren Acampora is the author of The Wonder Garden, which won the GLCA New Writers Award, and was named a Barnes & Noble Discover Great New Writers selection, an Indie Next selection, a New England Book Award finalist, and one of Amazon and NPR's best books of the year. The Paper Wasp is her first novel.