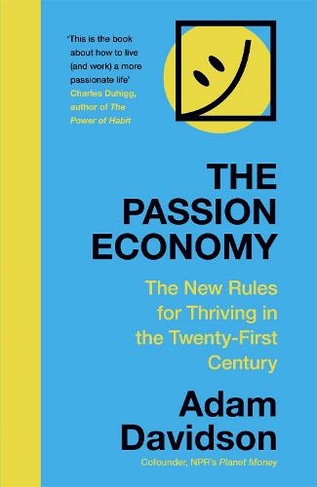 The Passion Economy: The New Rules for Thriving in the Twenty-First Century

By Adam Davidson (Author)
Hardback
https://www.whsmith.co.uk/products/the-passion-economy-the-new-rules-for-thriving-in-the-twentyfirst-century/adam-davidson/hardback/9781473683655-12-000.html £16.00 rrp £20.00 Save £4.00 (20%)
GBP
Availability
In Stock
Free Delivery Available When You Spend £25 Or More
Details
Spend £25 On Products To Receive Free Standard Delivery To Your Home Or Free Next Working Day Click And Collect To Store
Share

'His book injects some grounded, non-jargon-laden reality into the bland corporate-speak around notions of passion, engagement and purpose.' Financial Times 'This is explicitly a book to help a "regular person do well in a rapidly changing economy" and it succeeds precisely because there is no hyperbole or hard sell. No dynamism is required' Financial Times 'Inspiration for entrepreneurs that should be required reading in any business school curriculum' Kirkus 'The Passion Economy is exactly what everyone needs today: examples of how to thrive in an economy that can seem overwhelming, and crystal-clear explanations of how to succeed. This is the book about how to live (and work) a more passionate life' Charles Duhigg, author of The Power of Habit 'Adam Davidson is one of America's most accomplished business journalists - and this book reminds us why. With a reporter's eye and a storyteller's grace, he has traveled the country to find regular people who have cracked the code of the modern economy. Reading their stories will reveal the secrets of successful careers' Daniel H. Pink, author of When 'Move over Malcolm Gladwell. In The Passion Economy Adam Davidson upends the conventional thinking about how to succeed in our topsy-turvy, seemingly unforgiving post-industrial economy by sharing the stories of regular people who followed their dreams' William D. Cohan, author of House of Cards The brilliant creator of NPR's Planet Money podcast and award-winning New Yorker staff writer explains our current economy: laying out its internal logic and revealing the transformative hope it offers for millions of people to thrive as they never have before. Contrary to what you may have heard, the middle class is not dying and robots are not stealing our jobs. In fact, writes Adam Davidson--one of our leading public voices on economic issues-- the twenty-first-century economic paradigm offers new ways of making money, fresh paths toward professional fulfillment, and unprecedented opportunities for curious, ambitious individuals to combine the things they love with their careers. Drawing on the stories of average people doing exactly this--an accountant overturning his industry, a sweatshop owner's daughter fighting for better working conditions, an Amish craftsman meeting the technological needs of Amish farmers--as well as the latest academic research, Davidson shows us how the twentieth-century economy of scale has given way in this century to an economy of passion. He makes clear, too, that though the adjustment has brought measures of dislocation, confusion, and even panic, these are most often the result of a lack of understanding. In The Passion Economy, he delineates the ground rules of the new economy, and armed with these, we begin to see how we can succeed in it according to its own terms--intimacy, insight, attention, automation, and, of course, passion. An indispensable road map and a refreshingly optimistic take on our economic future.

Adam Davidson is currently a staff writer at The New Yorker, where he writes The Financial Page column. He also co-founded and co-hosted National Public Radio's "Planet Money," after serving as the international business and economics correspondent for NPR.His co-reported episode for "This American Life," "The Giant Pool of Money," which received the Peabody, DuPont-Columbia, and Polk Awards, and was named one of the top works of journalism of the decade by New York University's Arthur L. Carter Journalism Institute.His work is heard regularly on "Morning Edition," "All Things Considered," and he is a frequently featured guest on MSNBC, Meet The Press, Anderson Cooper 360, Good Morning America, and other television news shows.