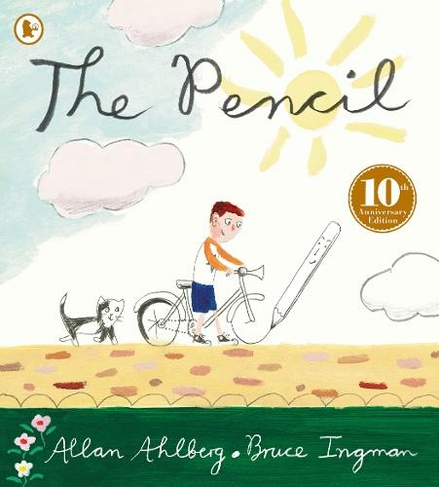 The acclaimed duo behind The Runaway Dinner and Previously imagine the comical world that comes to life when a pencil starts to draw... "A hilarious and utterly enchanting new classic" The Times A special 10th anniversary edition of a modern classic, The Pencil is a playful, witty, wonderfully quirky story about the power of imagination. Say hi to Banjo! Once a pencil draws him, there's no telling what will come next - a dog, a cat, a chase (of course), and a paintbrush to colour in an ever-expanding group of family and friends. But it's not long before the complaints begin - "This hat looks silly!" "My ears are too big!" - until the poor pencil has no choice but to draw ... a rubber. Oh no! In the hands of Allan Ahlberg and Bruce Ingman, can anything but havoc and hilarity ensue? With gorgeous golden foil on the cover and spine, this edition is one to share and treasure.

Allan Ahlberg has written nearly 140 titles for children, including Everybody Was a Baby Once, The Pencil, The Runaway Dinner and such classics as The Jolly Postman series and Peepo. His books have won numerous awards: the Kurt Maschler Award, the Blue Peter Award and the Children's Book Award. Allan lives in Sussex.Bruce Ingman's first book, When Martha's Away, was published in 1995 and was honoured with the National Art Library Award. It also won the 1996 Mother Goose Award for the most exciting British newcomer to children's books. Since then, he has made four more picture books, including Bad News, I'm in Charge and Boing!, written by Sean Taylor. He lives in West London.