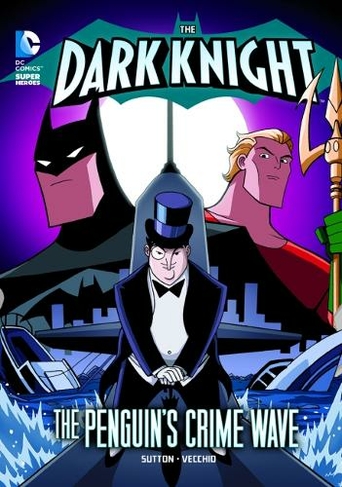 The PENGUIN is on the loose...at sea! He's hijacking high-class yachts with his penguin-shaped submarine. To stop him, the DARK KNIGHT will need to sink to this super-villain's evil depths, or become victim to the feathered felon's foul play.

Laurie Sutton has read comics since she was a kid. She grew up to become an editor for Marvel, DC Comics, Starblaze, and Tekno Comics. She has written Adam Strange for DC, Star Trek: Voyager for Marvel, plus Star Trek: Deep Space Nine and Witch Hunter for Malibu Comics. There are long boxes of comics in her closet where there should be clothing and shoes. Laurie has lived all over the world, and currently resides in Florida. Luciano Vecchio currently lives in Buenos Aires, Argentina. With experience in illustration, animation, and comics, his works have been published in the US, Spain, UK, France, and Argentina. His credits include Ben 10 (DC Comics), Cruel Thing (Norma), Unseen Tribe (Zuda Comics), Sentinels (Drumfish Productions), and several DC Super Heroes books for Stone Arch Books.