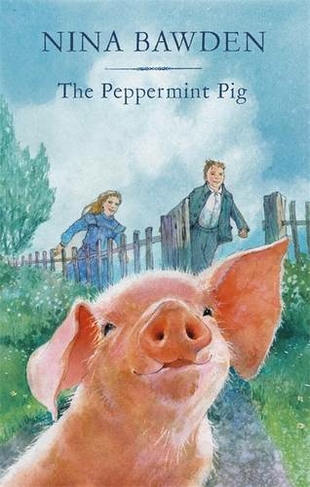 The Peppermint Pig: 'Warm and funny, this tale of a pint-size pig and the family he saves will take up a giant space in your heart' Kiran Millwood Hargrave (Virago Modern Classics)

'Warm and funny, this tale of a pint-size pig and the family he saves will take up a giant space in your heart' KIRAN MILLWOOD HARGRAVE 'What a consummate storymaker Nina Bawden is' MICHAEL MORPURGO WINNER OF THE GUARDIAN AWARD FOR CHILDREN'S FICTION 'D'ya want a peppermint pig, Mrs Greengrass?' Poll looked at the milkman, thinking of sweets, but there was a real pig poking its snout out of the milkman's coat pocket. It was the tiniest pig she had ever seen. 'What's a peppermint pig?' 'Runt of the litter. Too small for the sow to raise. He'd only get trampled in in the rush.' Mother took the pig from him and held it firmly while it kicked and squealed. 'Well, he seems strong enough. And even runts grow.' 'Oh,' Poll said. 'Oh, Mother.' She stroked the small, wriggling body. 'Theo,' she shouted, 'Look what we've got!' It is a difficult year for the Greengrasses. Poll's father has lost his job and gone overseas, the family are living off the charity of two aunts, and Poll and her brother Theo just can't seem to keep out of trouble. It takes a tiny, mischievous pig to bring laughter back into their lives. This is a collection of the best children's literature, curated by Virago, and will be coveted by children and adults alike. These are timeless tales with beautiful covers, that will be treasured and shared across the generations. Some titles you will already know; some will be new to you, but there are stories for everyone to love, whatever your age. Our list includes Nina Bawden (Carrie's War, The Peppermint Pig), Rumer Godden (The Dark Horse, An Episode of Sparrows), Joan Aiken (The Serial Garden, The Gift Giving) E. Nesbit (The Psammead Trilogy, The Bastable Trilogy, The Railway Children), Frances Hodgson Burnett (The Little Princess,The Secret Garden) and Susan Coolidge (The What Katy Did Trilogy). Discover Virago Children's Classics. Line drawings by Alan Marks

Nina Bawden (1925-2012) was one of Britain's best-loved writers for both adults and children. Several of her children's books - Carrie's War, a Phoenix Award winner;The Peppermint Pig, which won the Guardian Fiction Award; and Keeping Henry - have become contemporary classics. She wrote over forty novels, slightly more than half of which are for adults, and she was shortlisted for the 1987 Man Booker Prize for Circles of Deceit. She received the prestigious S T Dupont Golden Pen Award for a lifetime's contribution to literature in 2004, and in 2010 The Birds on the Trees was shortlisted for the Lost Booker of 1970.