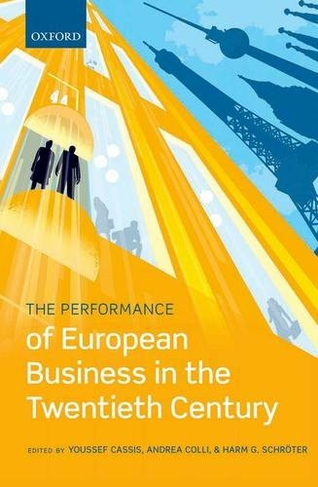 The Performance of European Business in the Twentieth Century

This book originated from the idea that performance is what really matters in business and thus in business history. Yet, surprisingly, the analysis of performances has been neglected by economic and business historians. This book is a first attempt to fill this gap and in doing so provides a totally new approach to European business history. Rather than bringing together national studies, it is based on a single database, measuring performance in eight European countries according to identical criteria. The study spans the entire twentieth century, with particular attention to five benchmark moments: the height of the first globalisation on the eve of the First World War; the late 1920s boom preceding the Great Depression; the European reconstruction of the mid-1950s; the end of 'Golden Age' in the early 1970s; and the height of the second globalisation at the turn of the twenty-first century. The analysis is based on a sample of 1,225 companies, belonging to the three major European economies, Britain, France and Germany; two large south European latecomers, Italy and Spain; two smaller north western countries, Belgium and Sweden, and one small Nordic country, Finland. Performance has been measured using two ratios of profitability: return on equity (ROE) and holding return (HR), thus providing a complementary measure of profitability, the former as seen from the firm's perspective, the latter form the investor's perspective. The book's findings, at times surprising, at once confirm and infirm widely held assumptions regarding business performance - regarding strategy and structure, ownership and control, old and new industries, emerging and advanced economies.

Youssef Cassis is Professor of Economic History at the European University Institute, Florence. He was previously Professor of Economic History at the University of Geneva (2004-2010) and at the University Pierre Mendes France, Grenoble (1997-04).He has held visiting professorships at the Cass Business School, the Graduate Institute in Geneva and the University of St Gallen. His work mainly focuses on banking and financial history, as well as business history moregenerally. His numerous publications on the subject include, A History of International Financial Centres, 1780-2005, (Cambridge University Press, 2006), and Crises and Opportunities, The Shaping of Modern Finance (Oxford University Press, 2011) among many others. He was the cofounder, in 1994, ofFinancial History Review (Cambridge University Press) and a member of the Academic Advisory Council of the European Association for Banking and Financial History and past President (2005-07) of the European Business History AssociationAndrea Colli is Professor of Economic History at Bocconi University, in the Department of Institutional Analysis and Public Management. His research interests include family capitalism, the international business, and corporate governance from a historical perspective. He has been a member of the Governing Council of the European Business History Association since 2002.Harm G. Schroeter received his PhD in 1981. He worked at ten different universities, since 1998 at the University of Bergen, Norway. His main interest is on European economic and business history. Books: Americanization of the European Economy. A compact survey of American economic influence in Europe since the 1880s (2005), The European Enterprise, Historical investigation into a future species (ed. 2008); with Battilani: The cooperative business movement, 1950 to the present (eds. 2012).He served as President of European Business History Association, acts as referee for many international journals and publishing houses. He is a member of the editorial board of several journals.