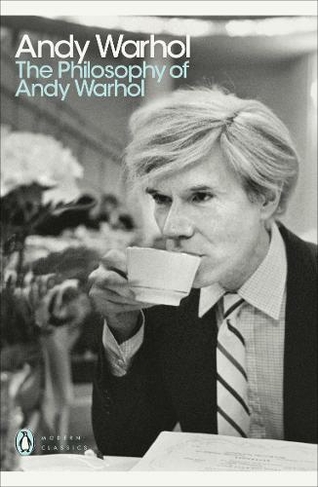 By Andy Warhol (Author)
Paperback
https://www.whsmith.co.uk/products/the-philosophy-of-andy-warhol-penguin-modern-classics/andy-warhol/paperback/9780141189109-12-000.html £8.19 rrp £9.99 Save £1.80 (18%)
GBP
Availability
In Stock
Free Delivery Available When You Spend £25 Or More
Details
Spend £25 On Products To Receive Free Standard Delivery To Your Home Or Free Next Working Day Click And Collect To Store

The autobiography of an American icon 'I never think that people die. They just go to department stores' Andy Warhol - American painter, filmmaker, publisher, actor and major figure in the Pop Art movement - was in many ways a reluctant celebrity. Here, in his autobiography, he spills his secrets and muses about love, sex, food, beauty, fame, work, money, success, New York and America and its place in the world. But it is his reflections on himself, his childhood in McKeesport, Pennsylvania, the explosion of his career in the Sixties and his life among celebrities - from working with Elizabeth Taylor to partying with the Rolling Stones - that give a true insight into the mind of one of the most iconic figures in twentieth-century culture. Andy Warhol (1928-1987), was an American painter, filmmaker, publisher, actor, and a major figure in the Pop Art movement. He also produced a significant body of film work, including the famous Chelsea Girls; characterised the epoch with the now-famous expression 'fifteen minutes of fame'; produced the first album by The Velvet Underground; and was nearly killed just two days before the assassination of JFK. If you enjoyed The Philosophy of Andy Warhol, you might like 100 Artists' Manifestos, also available in Penguin Modern Classics. 'Acute. Accurate. Mr Warhol's usual amazing candor. A constant entertainment and enlightenment' Truman Capote

Andy Warhol (1928-1987), was an American painter, filmmaker, publisher, actor, and a major figure in the Pop Art movement. He also produced a significant body of film work, including the famous Chelsea Girls. Equally well known in the late Sixties and early Seventies as resident host at his studio, the Factory. Andy Warhol died following gall bladder surgery, in New York on the 22nd February 1987. As Warhol said: 'I never think that people die. They just go to department stores.'