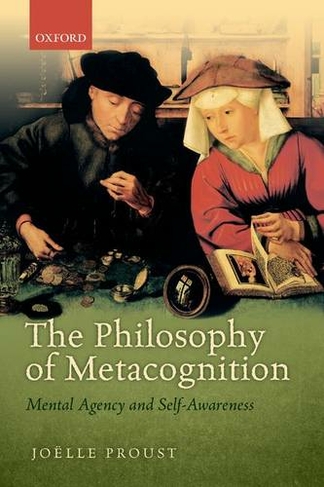 The Philosophy of Metacognition: Mental Agency and Self-Awareness

Also available on eBook for £22.19. Click here to purchase from Rakuten Kobo

Does metacognition, i.e. the capacity to form epistemic self-evaluations about one's current cognitive performance, derive from a mindreading capacity, or does it rely, at least in part, on sui generis informational processes? In The Philosophy of Metacognition Joelle Proust provides a powerful defense of the second position. Drawing on discussions of empirical evidence from comparative, developmental, and experimental psychology, as well as from neuroscience, and on conceptual analyses, she purports to show that, in contrast with analytic metacognition, procedural metacognition does not need to involve metarepresentations. Procedural metacognition seems to be available to some non-humans (some primates and rodents). Proust further claims that metacognition is essentially related to mental agency, i.e. cognitive control and monitoring. 'Self-probing' is equivalent to a self-addressed question about the feasibility of a mental action ('Am I able to remember this word?'). 'Post-evaluating' is a way of asking oneself whether a given mental action has been successfully completed ('Is this word the one I was looking for?'). Neither question need be articulated conceptually for a feeling of knowing or of being right to be generated, or to drive epistemic control. Various issues raised by the contrast of a procedural, experience-based metacognition, with an analytic, concept-based metacognition are explored, such as whether each is expressed in a different representational format, their sensitivity to different epistemic norms, and the existence of a variety of types of epistemic acceptance.

Joelle Proust is Director of Research at Fondation Pierre-Gilles de Gennes pour la Recherche, Ecole Normale Superieure, Paris. Proust first conducted research at the Centre National de la Recherche Scientifique in the domain of the history and philosophy of logic, and was awarded a CNRS bronze medal for her first book, Questions of Form (Minnesota Press, 1989). She was a founding member of the European Society for Philosophy and Psychology, and ofthe European Society for Analytic Philosophy. From 2006 to 2009 Proust was the principal investigator of an European Science Foundation interdisciplinary research program about the evolution of metacognition; in 2010 she was awarded a European Research Council advanced grant.