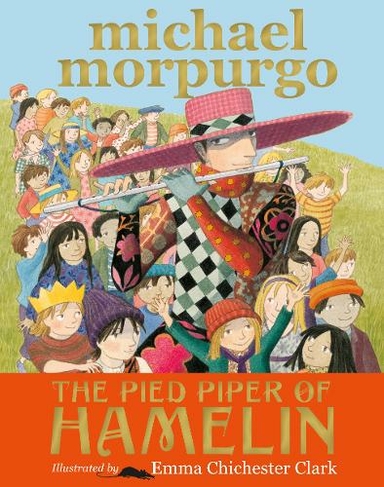 The Pied Piper of Hamelin

A beautiful new edition of this classic retelling by master storyteller Michael Morpurgo, with glorious illustrations by Emma Chichester Clark. In the town of Hamelin, the rich and greedy live like kings and queens while the poor and sick scavenge rubbish tips for scraps. A lame orphan boy tells the classic tale of how a plague of rats takes over the town and how a fantastic piper offers to rid Hamelin of its rats for a single gold coin, then lures away the town's children when the greedy mayor breaks his word. Masterfully weaving contemporary social and environmental themes into a gripping tale, and celebrating it with breath-taking illustrations, former British Children's Laureate Michael Morpurgo and illustrator Emma Chichester Clark team up to create a compelling new take on this timeless story.

Michael Morpurgo has written more than ninety books and and has won numerous prizes, including both the Whitbread Award and the Children's Book Award. His books include retellings of Hansel and Gretel, illustrated by Emma Chichester Clark, as well as Beowulf and Sir Gawain the Green Knight, both illustrated by Michael Foreman. Michael was Children's Laureate between 2003 - 2005. He lives near Winkleigh, Devon.Emma Chichester Clark studied at the Chelsea School of Art and the Royal College of Art from 1980 to 1983, where she was taught by Quentin Blake. In 1988, she won the Mother Goose Award for the most exciting newcomer to children's book illustration. She has written and illustrated many acclaimed books for young readers, including Goldilocks and the Three Bears, which she retold and illustrated, and Hansel and Gretel, retold by Michael Morpurgo. She lives in London, W6.