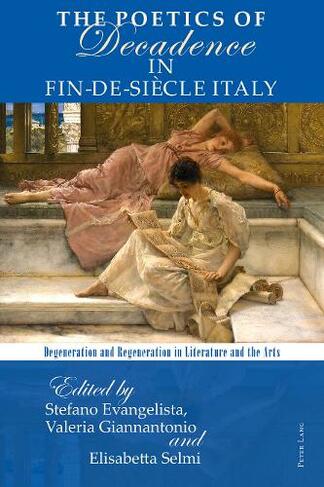 The Poetics of Decadence in Fin-de-Siecle Italy: Degeneration and Regeneration in Literature and the Arts (New edition)

In the 1880s and 1890s, materialism in art was counterbalanced by attention to the subjective individual experience, expressed in the new modes inaugurated by Symbolism, Decadence and Aestheticism. In particular, Decadent artists and writers inspired the lasting name of an age fascinated by the contemplation of luxury and decay: the fin de siecle. Notions of decadence and degeneration were not limited to aesthetic experience but were regarded as sociological phenomena and attained pseudoscientific status. This volume explores the themes of degeneration and regeneration in fin-de-siecle Italian culture, collecting together essays by recognized experts as well as younger scholars. The book begins by reflecting on the poetics of decadence, before turning its focus to significant figures of the period and their literary, critical and artistic work, providing analysis from both national and comparative perspectives. Subjects examined include the turn towards idealism of Anna Zuccari, the mysticism and ethics of Fogazzaro, Pascoli and Tolstoy, the influence of German philosophy and European symbolism on Gabriele D'Annunzio's literary works, the art criticism of Enrico Panzacchi, and the aesthetic regeneration of divas in early Italian cinema.

Stefano Evangelista has completed a PhD in Italian literature at Durham University, where he is also a postgraduate member of the Centre for Nineteenth-Century Studies. He has been a visiting fellow in the Graduate School of Arts and Sciences at Harvard University and a visiting PhD student at the Scuola Normale Superiore in Pisa.Valeria Giannantonio is Associate Professor of Italian Literature at the Universita degli Studi "G. D'Annunzio" Chieti - Pescara. Her research interests include early modern Italian literature and the literary work of Gabriele D'Annunzio, Ignazio Silone and the crepuscular poets. She is member of the editorial boards of Critica letteraria, Studi medievali e moderni and Studium.Elisabetta Selmi is Associate Professor of Italian Literature and Medieval and Renaissance Theatre in the Dipartimento di Studi Linguistici e Letterari at the University of Padua. Her research interests focus on Renaissance and early modern literature and theatre, nineteenth-century studies, classical poetics and religious literature.