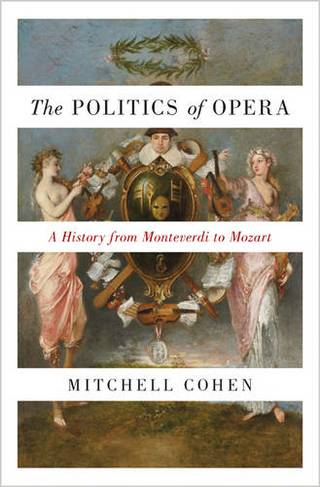 The Politics of Opera A History from Monteverdi to Mozart

Also available on eBook for £29.39. Click here to purchase from Rakuten Kobo

A wide-ranging look at the interplay of opera and political ideas through the centuries The Politics of Opera takes readers on a fascinating journey into the entwined development of opera and politics, from the Renaissance through the turn of the nineteenth century. What political backdrops have shaped opera? How has opera conveyed the political ideas of its times? Delving into European history and thought and an array of music by such greats as Lully, Rameau, and Mozart, Mitchell Cohen reveals how politics--through story lines, symbols, harmonies, and musical motifs--has played an operatic role both robust and sotto voce. Cohen begins with opera's emergence under Medici absolutism in Florence during the late Renaissance--where debates by humanists, including Galileo's father, led to the first operas in the late sixteenth century. Taking readers to Mantua and Venice, where composer Claudio Monteverdi flourished, Cohen examines how early operatic works like Orfeo used mythology to reflect on governance and policy issues of the day, such as state jurisdictions and immigration. Cohen explores France in the ages of Louis XIV and the Enlightenment and Vienna before and during the French Revolution, where the deceptive lightness of Mozart's masterpieces touched on the havoc of misrule and hidden abuses of power. Cohen also looks at smaller works, including a one-act opera written and composed by philosopher Jean-Jacques Rousseau. Essential characters, ancient and modern, make appearances throughout: Nero, Seneca, Machiavelli, Mazarin, Fenelon, Metastasio, Beaumarchais, da Ponte, and many more. An engrossing book that will interest all who love opera and are intrigued by politics, The Politics of Opera offers a compelling investigation into the intersections of music and the state. 20 halftones.

Mitchell Cohen is professor of political science at Baruch College and the Graduate Center of the City University of New York and editor emeritus of Dissent magazine. His books include Zion and State and The Wager of Lucien Goldmann (Princeton). His writing has appeared in such publications as the New York Times and the Times Literary Supplement. He lives in New York City.