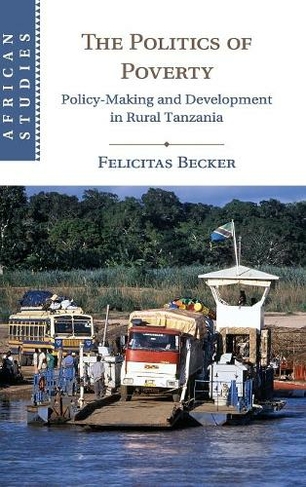 The Politics of Poverty: Policy-Making and Development in Rural Tanzania (African Studies)

How is it that rural poverty in southern Tanzania appears both easy to explain and yet also mystifying? Why is it that 'development' is such a touchstone, when actual attempts at fostering development have been largely ephemeral and/or unpopular for decades? In this book, Felicitas Becker traces dynamics of rural poverty based on the exportation of foodstuffs rather than the better-known problems connected to exportation of migrant labour, and examines what has kept the development industry going despite its failure to break these dynamics. Becker argues that development planners often exaggerated their prospects to secure funding, repackaged old strategies as new to maintain their promise, and shifted blame onto rural Africans for failing to meet the expectations they had raised. But the rural poor, too, pursued conversations on the causes and morality of poverty and wealth. Despite their dependence and deprivation, officials found repeatedly that they could not take them for granted. Worked examples or Exercises; 1 Maps; 11 Halftones, black and white

Felicitas Becker is Professor of African history at Ghent University, and has previously taught at School of Oriental and African Studies, University of London, Simon Fraser University, Vancouver, and the University of Cambridge. Her Ph.D. thesis from the University of Cambridge won the Ellen MacArthur Prize in economic history, and her first book, Becoming Muslim in Mainland Tanzania, 1890-2000 (2008), obtained a British Academy postdoctoral fellowship publication award. She is currently working on the interaction between notions of progress used in development discourse and those deployed by religious reformers in East Africa.