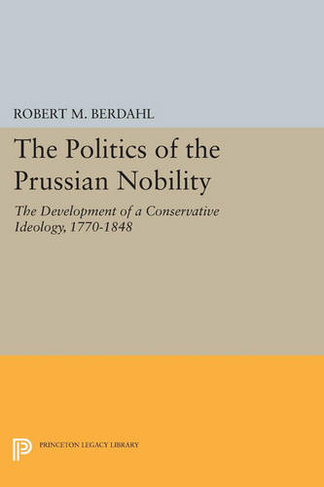 The Politics of the Prussian Nobility The Development of a Conservative Ideology, 1770-1848

Measured by its capacity to endure, the Prussian nobility was the most successful in the modern history of continental Europe. Throughout the long vicissitudes of its history, this class--the Junkers--displayed a remarkable ability to adapt to new circumstances and maintain its own political power. Robert Berdahl presents a comprehensive interpretation of the tenacity of the Prussian nobles from the late eighteenth century until the revolution of 1848. At one level, he provides a richly detailed economic, social, and political history: the story of how the landowning nobility coped with changes in rural social relations after the emancipation of the serfs in 1807 and of how it survived the agrarian depression of the 1820s by the development of capitalist agriculture. At another level, he shows how the Junkers developed an ideology of conservatism that justified their control of a society that was becoming increasingly bourgeois. The domination of society by members of the nobility was traditionally supported by their experience in governing landed estates and particularly by the imagery of paternalism. Capitalist agriculture undermined the old landlord-peasant relations, but the nobility continued to exploit paternalistic images of domination. Originally published in 1988. The Princeton Legacy Library uses the latest print-on-demand technology to again make available previously out-of-print books from the distinguished backlist of Princeton University Press. These editions preserve the original texts of these important books while presenting them in durable paperback and hardcover editions. The goal of the Princeton Legacy Library is to vastly increase access to the rich scholarly heritage found in the thousands of books published by Princeton University Press since its founding in 1905.