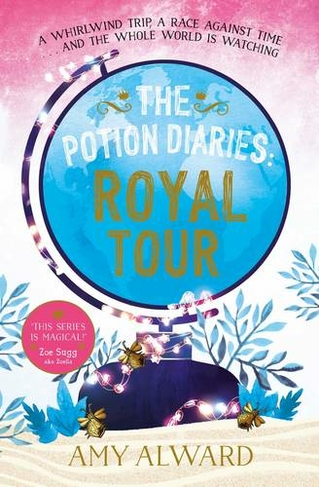 By Amy Alward (Author)
Paperback
https://www.whsmith.co.uk/products/the-potion-diaries-royal-tour-the-potion-diaries-2/amy-alward/paperback/9781471143588-12-000.html £6.55 rrp £7.99 Save £1.44 (18%)
GBP
Availability
In Stock
Free Delivery Available When You Spend £25 Or More
Details
Spend £25 on eligible products to receive free standard delivery to home or free next working day click and collect to store
Share

Since winning the Hunt and saving her new BFF, Princess Evelyn, Sam Kemi has been royally busy.. What with TV interviews, working in her family's potion store and preparing to join Evelyn on her world tour, Sam STILL hasn't had time for a real date with Zain, her new-boyfriend-slash-former-rival. And that's not happening anytime soon. Someone has tampered with Sam's grandad's mind and she is the only one who can unlock his memories. Memories that contain the key to the most powerful potion in the world and one which people would kill for . . . So Sam must swap dresses, princes and palaces for dragons, centaurs and caves in her quest to save her grandad (and everyone else). Just your standard episode in the life of a potion-making teenager, then. Praise for The Potion Diaries: 'It's so cool!' Zoe Sugg aka Zoella 'Inventive, romantic and downright delightful' Sarah J Maas, author of theThrone of Glass series EU Toy Safety Directive - No warning

Amy Alward is a Canadian author and freelance editor who divides her time between the UK and Canada. In 2013, she was listed as one of The Bookseller's Rising Stars. Her debut fantasy adventure novel, The Oathbreaker's Shadow, was published in 2013 under the name Amy McCulloch and was longlisted for the 2014 Branford Boase Award for best UK debut children's book. Her first book written as Amy Alward, The Potion Diaries, was an international success and the second novel in the series, The Potion Diaries: Royal Tour will be published in August 2016. She is currently travelling the world, researching more extraordinary settings and intriguing potions for the third book in the series. She lives life in a continual search for adventure, coffee, and really great books. Visit her at AmyAlward.co.uk or on Twitter @Amy_Alward.