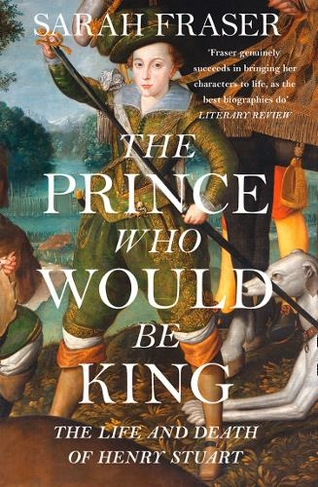 The Prince Who Would Be King: The Life and Death of Henry Stuart

By Sarah Fraser (Author)
Paperback
£8.19 rrp £9.99 Save £1.80 (18%)
GBP
Availability
In Stock
Free Delivery Available When You Spend £15 Or More
Details
Spend £15 On Products To Receive Free Standard Delivery To Your Home Or Free Next Day Click and Collect To Stores
Share

Henry Stuart's life is the last great forgotten Jacobean tale. Shadowed by the gravity of the Thirty Years' War and the huge changes taking place across Europe in seventeenth-century society, economy, politics and empire, his life was visually and verbally gorgeous. NOW THE SUBJECT OF BBC2 DOCUMENTARY The Best King We Never Had By 1610, the precocious and dynamic Henry Stuart, Prince of Wales was the hope of Britain and Protestant Europe. Eldest son of James VI of Scotland & I of England, his interests ranged far beyond his Court's renowned love of the arts. He invested in cutting-edge science, and began modernising Britain's military and naval capacity. Hailed as `Protector of Virginia', Henry stood at the forefront of the founding of British America. All before his tragic death, aged 18. In this rich and vibrant biography, prize-winning author, Sarah Fraser, brings Henry Stuart to life as the epitome of a Renaissance prince - active, virtuous, ambitious. Henry's story recreates an exciting part of the Jacobean era, during a transformational period of British history.

Sarah Fraser won the 2012 Saltire First Scottish Book of the Year for her acclaimed debut The Last Highlander, which in 2016 also became a New York Times ebook bestseller. A writer and regular contributor on TV and radio, she has a PhD in obscene Gaelic poetry and lives in the Scottish Highlands. She has four children. Follow Sarah on Twitter: @sarah_fraseruk. And at www.sarahfraser.co.uk where her speaking dates can be found, and regular blogs about the tumultuous Stuart era.