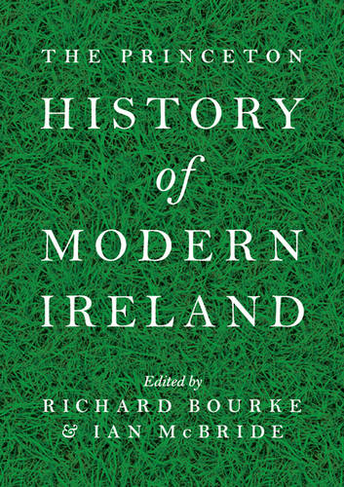 The Princeton History of Modern Ireland

Also available on eBook for £32.87. Click here to purchase from Rakuten Kobo

This book brings together some of today's most exciting scholars of Irish history to chart the pivotal events in the history of modern Ireland while providing fresh perspectives on topics ranging from colonialism and nationalism to political violence, famine, emigration, and feminism. The Princeton History of Modern Ireland takes readers from the Tudor conquest in the sixteenth century to the contemporary boom and bust of the Celtic Tiger, exploring key political developments as well as major social and cultural movements. Contributors describe how the experiences of empire and diaspora have determined Ireland's position in the wider world and analyze them alongside domestic changes ranging from the Irish language to the economy. They trace the literary and intellectual history of Ireland from Jonathan Swift to Seamus Heaney and look at important shifts in ideology and belief, delving into subjects such as religion, gender, and Fenianism. Presenting the latest cutting-edge scholarship by a new generation of historians of Ireland, The Princeton History of Modern Ireland features narrative chapters on Irish history followed by thematic chapters on key topics. The book highlights the global reach of the Irish experience as well as commonalities shared across Europe, and brings vividly to life an Irish past shaped by conquest, plantation, assimilation, revolution, and partition. 3 tables.

Richard Bourke is professor in the history of political thought at Queen Mary University of London. He is the author of Empire and Revolution: The Political Life of Edmund Burke (Princeton). Ian McBride is professor of Irish and British history at King's College London. His books include Eighteenth-Century Ireland: The Isle of Slaves.