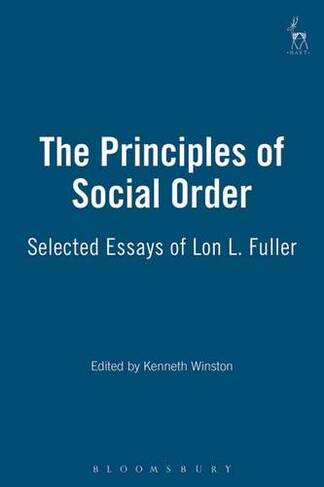 Lon Fuller coined the term "eunomics" for "the study of good order and workable social arrangements." The essays in this volume--representing most of the work of his mature years--are his "exercises in eunomics." They are studies of the principal forms of legal order, including contract, adjudication, mediation, legislation, and administration. In addition, the volume includes several essays on legal education and the ethics of lawyering. Fuller thought of lawyers as "architects of social structure," that is, creators and managers of the various forms of legal order. These responsibilities require close attention to problems of institutional design, in which the concern is with ends as well as means. Accordingly, Fuller believed that legal education should shift from the analysis of appellate court cases to a problem-solving orientation, attending to the conditions for "orderly, fair, and decent" governance. In a lecture on freedom published for the first time in this edition, Fuller develops the idea that the forms of legal order are the diverse vehicles by which freedom is effectively exercised in society. Lon Fuller taught contracts and jurisprudence at the Harvard Law School from 1939 to 1972, where he was Carter Professor of General Jurisprudence. His writings, such as "The Case of the Speluncean Explorers," are classics of the legal literature. black & white illustrations

Kenneth Winston is Lecturer in Ethics and Assistant to the Dean for Special Projects on International Ethics and Diversity,at the Kennedy School of Government, Harvard University.