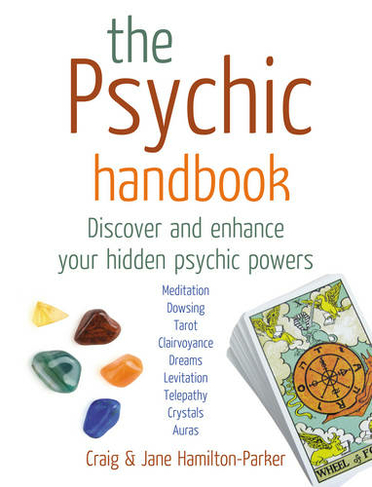 The Psychic Handbook: Discover and Enhance Your Hidden Psychic Powers

Most of us have had psychic experiences at one time or another; we may find a new place strangely familiar, finish other people's sentences or sense a definite positive or negative feeling about a house. Almost everyone has some latent psychic ability. The Psychic Handbook provides a fun, entertaining way to develop your psychic power. Craig Hamilton-Parker takes you step-by-step through skills such as mediumship, prophesy, psychometry, dream analysis, dowsing, numerology and clairvoyance. He also shows how you can learn to meditate in order to liberate the intuition that is the basis of all psychic ability, and find out about crystals and how they can have a beneficial effect on your life. Packed with information, experiments and games, including special cards developed by scientists to test your telepathic skills, The Psychic Handbook will show how you can explore an undiscovered part of your personality and unlock your psychic potential. 1

Craig and Jane Hamilton-Parker first shot to fame on Channel Four's The Big Breakfast morning television programme, predicting the upcoming week's news. Since then they have built a successful international TV career, making programmes for the BBC and Discovery Channel, as well as for television stations in France, Australia and South Korea. Craig Hamilton-Parker is a bestselling author of books on psychic mediumship, intuition and dreams. He has written columns and features for a number of newspapers and magazines, including the Daily Mail and The Times. When they are not writing or filming for TV, Craig and his wife Jane give private readings by appointment. They live in Hampshire.