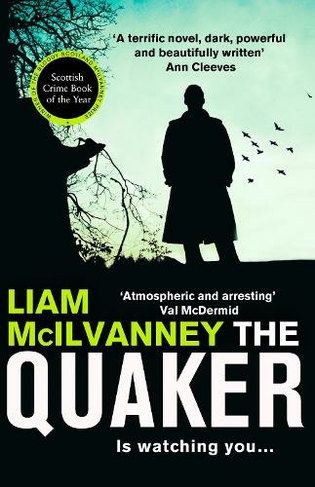 By Liam McIlvanney (Author)
Paperback
https://www.whsmith.co.uk/products/the-quaker/liam-mcilvanney/paperback/9780008259945-12-000.html £7.37 rrp £8.99 Save £1.62 (18%)
GBP
Availability
In Stock
Free Delivery Available When You Spend £25 Or More
Details
Spend £25 On Products To Receive Free Standard Delivery To Your Home Or Free Next Working Day Click And Collect To Store

The Quaker is watching you... In the chilling new crime novel from award-winning author Liam McIlvanney, a serial killer stalks the streets of Glasgow and DI McCormack follows a trail of secrets to uncover the truth... Winner of the 2018 McIlvanney Prize for Scottish Crime Book of the Year A city torn apart. It is 1969 and Glasgow has been brought to its knees by a serial killer spreading fear throughout the city. The Quaker has taken three women from the same nightclub and brutally murdered them in the backstreets. A detective with everything to prove. Now, six months later, the police are left chasing a ghost, with no new leads and no hope of catching their prey. They call in DI McCormack, a talented young detective from the Highlands. But his arrival is met with anger from a group of officers on the brink of despair. A killer who hunts in the shadows. Soon another woman is found murdered in a run-down tenement flat. And McCormack follows a trail of secrets that will change the city - and his life - forever...

Liam McIlvanney was born in Scotland and studied at the universities of Glasgow and Oxford. He has written for numerous publications, including the London Review of Books, the Times Literary Supplement and the Guardian. His debut, Burns the Radical, won the Saltire First Book Award, and his most recent book, Where the Dead Men Go, won the Ngaio Marsh Award for Best Crime Novel. The Quaker won the 2018 McIlvanney Prize for Scottish Crime Novel of the Year. He is Stuart Professor of Scottish Studies at the University of Otago, New Zealand. He lives in Dunedin with his wife and four sons.