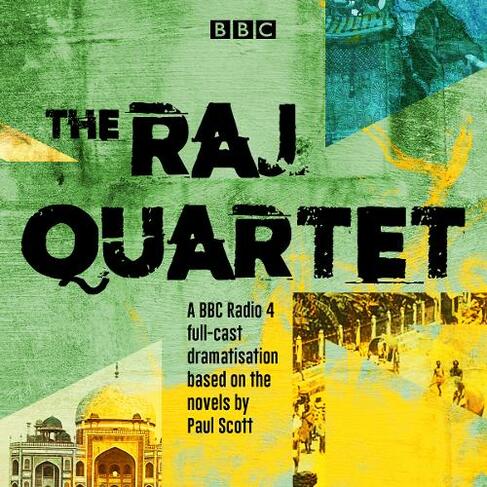 The Raj Quartet: The Jewel in the Crown, The Day of the Scorpion, The Towers of Silence & A Division of the Spoils: A BBC Radio 4 full-cast dramatisation (Unabridged edition)

An epic full-cast dramatisation of Paul Scott's classic series of novels charting the last days ofthe British Raj. Spanning the years from 1942 to 1947, this landmark saga explores the relationships between an array of soldiers and civilians stationedin India, as the sun sets on British colonial rule. As The Jewel in the Crown opens, World War II is at its height and Gandhi is calling for the British to leave. When Daphne Manners arrives in Mayapore, she meets two men who will change her life: Hari Kumar and Ronald Merrick. She begins to fall for Hari, but Ronald Merrick - the local police superintendent - becomes infatuated with her and seethes with hatred for Hari. The Day of the Scorpion finds Merrick worming his way into the Layton family, and his treatment of Hari Kumar is revealed. In The Towers of Silence, it is summer 1945, and as the war ends Mabel Layton's companion Barbie Batchelor is forced to leave her home in Pankot. In A Division of the Spoils, Sergeant Guy Perron arrives to witness India's independence, while the Laytons plan for their future - but the division of the country will spark tragic consequences for many. The extensive, star-studded cast includes Anna Maxwell Martin (Bleak House, Motherland), Prasanna Puwanarajah (Doctor Foster), Geraldine James (who also starred in the film of The Jewel in the Crown), Mark Bazeley (Broadchurch), Benedict Cumberbatch (Sherlock), Kulvinder Ghir (Goodness Gracious Me) and Nina Wadia (Eastenders). Duration: 9 hours approx.

Paul Scott (Author) Paul Mark Scott was an English novelist, playwright, and poet, best known for his monumental tetralogy The Raj Quartet. His novel Staying On won the Booker Prize for 1977.