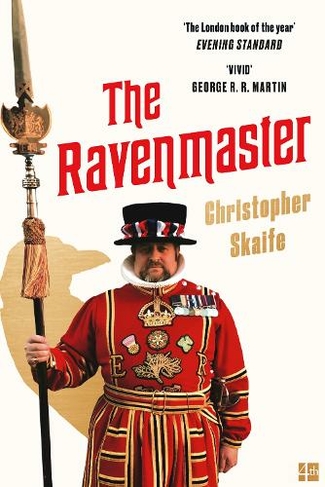 By Christopher Skaife (Author)
Paperback
https://www.whsmith.co.uk/products/the-ravenmaster-my-life-with-the-ravens-at-the-tower-of-london/christopher-skaife/paperback/9780008307936-12-000.html £8.19 rrp £9.99 Save £1.80 (18%)
GBP
Availability
In Stock
Free Delivery Available When You Spend £25 Or More
Details
Spend £25 On Products To Receive Free Standard Delivery To Your Home Or Free Next Working Day Click And Collect To Store
Share

'Packed with insight and anecdote, his story brings the Tower ravens to vivid life, each bird with a personality of its own. I've been fortunate enough to tour the Tower and meet the ravens a few times in years past; after reading this book, I cannot wait to go back' George R. R. Martin For centuries, the Tower of London has been home to a group of famous avian residents: the ravens. Each year they are seen by millions of visitors, and they have become as integral a part of the Tower as its ancient stones themselves. But their role is even more important than that - legend has it that if the ravens should ever leave, the Tower will crumble into dust, and great harm will befall the kingdom. One man is personally responsible for ensuring that such a disaster never comes to pass - the Ravenmaster. The current holder of the position is Yeoman Warder Christopher Skaife, and in this fascinating, entertaining and touching book he memorably describes the ravens' formidable intelligence, their idiosyncrasies and their occasionally wicked sense of humour. Over the years in which he has cared for the physical and mental well-being of these remarkable birds, Christopher Skaife has come to know them like no one else. They are not the easiest of charges - as he reveals, they are much given to mischief, and their escapades have often led him into unlikely, and sometimes even undignified, situations. Now, in the first intimate behind-the-scenes account of life with the ravens of the Tower, the Ravenmaster himself shares the folklore, history and superstitions surrounding both the birds and their home. The result is a compelling, inspiring and irreverent story that will delight and surprise anyone with an interest in British history or animal behaviour.

Before becoming Yeoman Warder and Ravenmaster at the Tower of London, Christopher Skaife served in the British Army for twenty-four years, during which time he became a Drum Major as part of a specialist machine gun platoon. He has been featured on the BBC, the History Channel, PBS, Buzzfeed, Slate and more. He lives at the Tower with his wife, his daughter and, of course, the ravens. Follow him on Twitter: @ravenmaster1.