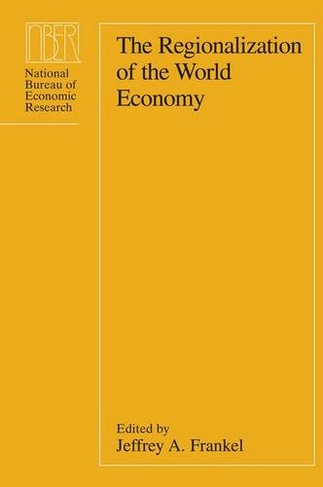 The Regionalization of the World Economy

Regional economic arrangements such as free trade areas (FTAs), customs unions, and currency blocs, have become increasingly prevalent in the world economy. Both pervasive and controversial, regionalization has caused some economists to be optimistic about the opportunities it creates and others fearful that it may corrupt fragile efforts to encourage global free trade. Including both empirical and theoretical studies, this volume addresses several important questions: why do countries adopt FTAs and other regional trading arrangements? To what extent have existing regional arrangements actually affected patterns of trade? What are the welfare effects of such arrangements? Several chapters explore the economic effects of regional arrangements on patterns of trade, either on price differentials or via the gravity model on bilateral trade flows. In addition, this text examines the theoretical foundation of the gravity model. Making extensive use of the gravity model of bilateral trade, several chapters explore the economic effects of regional arrangements. 15 line drawings, 37 tables