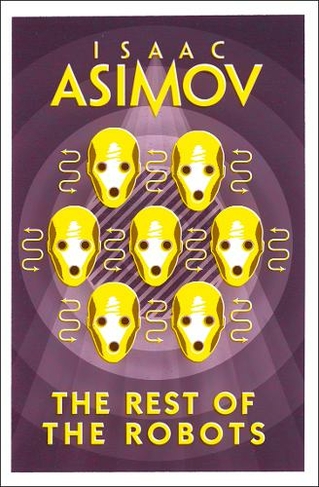 The Rest of the Robots

By Isaac Asimov (Author)
Paperback
https://www.whsmith.co.uk/products/the-rest-of-the-robots/isaac-asimov/paperback/9780008277802-12-000.html £7.37 rrp £8.99 Save £1.62 (18%)
GBP
Availability
In Stock
Free Delivery Available When You Spend £25 Or More
Details
Spend £25 On Products To Receive Free Standard Delivery To Your Home Or Free Next Working Day Click And Collect To Store

Isaac Asimov's ROBOT series - from the iconic collection I, ROBOT to four classic novels - contains some of the most influential works in the history of science fiction. Establishing and testing the THREE LAWS OF ROBOTICS, they continue to shape the understanding and design of artificial intelligence to this day. How could robots be used in a time of war? Could a robot be raised like a child? Could we allow them to have children of their own? Is there any human profession that could never be performed by a robotic replacement? In The Rest of the Robots, robopsychologist Dr. Susan Calvin and engineers Powell and Donovan return to investigate many more puzzling anomalies and catastrophic malfunctions. With characteristic wit, foresight and imagination, Asimov's stories uncover the practical and ethical issues humanity will encounter in a robotic future.

Isaac Asimov was born in 1920 in Russia and was brought to the USA by his parents three years later. He grew up in Brooklyn and attended Columbia University. After a short spell in the army, he gained a doctorate and worked in academia and chemical research. Asimov's career as a science fiction writer began in 1939 with the short story `Marooned Off Vesta'. Thereafter he became a regular contributor to the leading SF magazines of the day. Asimov wrote hundreds of short stories and novels, including the iconic I, Robot and Foundation. He won the Hugo Award four times and the Nebula Award once. Apart from his world-famous science fiction, Asimov also wrote highly successful detective mystery stories, a four-volume History of North America, a two-volume Guide to the Bible, a biographical dictionary, encyclopaedias, and textbooks, as well as two volumes of autobiography. Asimov died in 1992 at the age of 72.