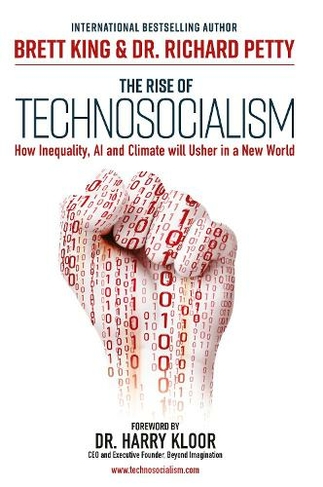 The Rise of Techno-Socialism: How Inequality, AI and Climate Will Usher in a New World Order

If the cost of providing universal health care is lower than the cost of building a political movement to prevent it, would politicians still view it as socialism? In a world where algorithms and robots take the jobs of immigrants and citizens alike, are border controls an effective response? If unemployment skyrockets due to automation, would conservative governments rather battle long-term social unrest, or could they agree on something like universal basic income? When renewable energy sources are a fraction of the cost of coal-generated electricity, should lobbyists be able to prevent changes to energy infrastructure? When the crowd's mood is measured in influence and exabytes, will real-time democracy render elections a thing of the past? International Bestselling authors Brett King and Dr Richard Petty explore the seismic social changes that will be thrust on the world over the coming decades. The Rise of Techno-Socialism seeks to answer both how our children will live with AI and climate disruption, along with which economies will likely emerge victorious in an always-on, smart world.

Brett King is an International Bestselling Author, a world-renowned futurist and media personality. President Xi Jinping cited his book Augmented. He has spoken in over 50 countries, given keynotes for TEDx, Wired, Techsauce, Singularity University, Web Summit, The Economist, IBM's World of Watson, CES, SIBOS and more. King hosts the world's #1 Fintech Radio Show/Podcast called Breaking Banks (180 countries, 6.5+ million listeners). He is the founder of Moven, a globally recognized mobile start-up, which has raised over US$40 million to date, and launched the first in-app mobile bank account offered anywhere in the world. His book Augmented: Life in the Smart Lane, was a top-10 non-fiction book in North America. Bank 4.0 remained a global bestseller in banking more than 12 months after release.Dr. Richard Petty is Chair of the Australian International School Hong Kong, immediate past Chair of the Australian Chamber of Commerce Hong Kong & Macau (2012-2017) and a past Chair and President of CPA Australia (2009-2010). He is a Board Member of International Federation of Accountants (IFAC, New York; since 2014) and a member of IFAC's Planning and Finance Group. Richard has served as a member of the B20 Financing Growth and Infrastructure Taskforce, Foundation Vice Chairman of the Hong Kong ASEAN Economic Cooperation Foundation. He sits on the board of multiple listed and private corporations across the world. Richard served as Professor and Executive Director International at Macquarie Graduate School of Management (2008-2018), has received international awards as a researcher and as an academic and has also co-authored several books.