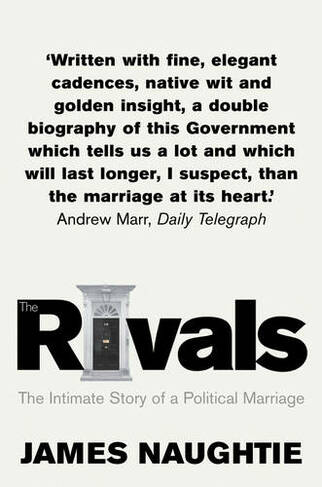 The Rivals The Intimate Story of a Political Marriage

A penetrating insider's view of the most important relationship in modern politics, the one on which the recent reinvention of Britain is founded: Tony Blair and Gordon Brown. By the celebrated Radio 4 Today Programme presenter James Naughtie. No Prime Minister and Chancellor this century have been bound so closely together, each depending on the other's strengths to repair weaknesses that might otherwise be politically fatal; yet theirs is a bond that crackles with suspicion and misunderstanding, lovers' tiffs that send tremors through the government . The story of the current era can only properly be told through the prism of this strange union, and it has never been told before. James Naughtie is a unique insider. A hugely respected political commentator, he has equal access to both men, to their key courtiers, to the party malcontents and everyone who has ever sat in Cabinet with them. Not since Alan Clark's Diaries has there been such a vivid, human portrait of the agonies and ecstasies of power in action. Even the supporting players are wildly dramatic: the saturnine plotting of Peter Mandelson, the muscled protection of Alistair Campbell, the Scots traditionalists facing down the Number 10 policy wonks. But the real drama is compressed into the central relationship. Here are Othello and Iago, Caesar and Brutus. This is a classic power play of our time, brilliantly, vividly and intimately staged by James Naughtie. Index

James Naughtie presents the Today programme on BBC Radio 4 and is former chief political correspondent of the Guardian and, before that, the Scotsman. He presents Bookclub on Radio 4, music and opera on BBC radio and television. He is a former Laurence Sterne fellow on the Washington Post and Sony Radio Personality of the Year.