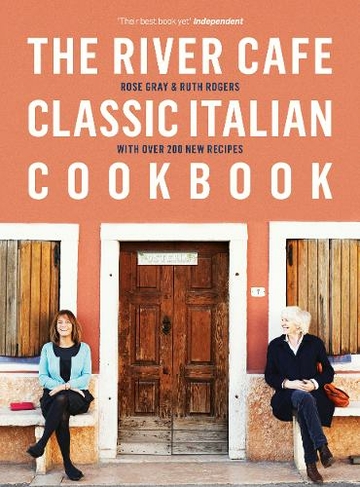 By Rose Gray (Author), Ruth Rogers (Author)
Paperback
https://www.whsmith.co.uk/products/the-river-cafe-classic-italian-cookbook/rose-gray/ruth-rogers/paperback/9780718189068-12-000.html N/A
GBP
Availability
Currently unavailable. We dont know when or if this item will be back in stock
Free Saver Delivery on orders over £25
Details
FREE SHIPPING over £25 for Saver Delivery
Share

'Their best book yet.' Independent The River Cafe serves the best of Italian food. This is THE cookbook. The best of the best of their classic Italian recipes . . . Enjoy a simple creamy risotto con latte, accompanied by a cool glass of prosecco. Toss spaghetti alla carbonara with juicy pancetta and fresh parsley. Or serve up a tray-baked chicken, drizzled in squeezed lemon, stuffed with tomatoes and olives. For afters, a treat from northern Italy, baked blackberry and apple strudel. 'Their favourite classic Italian recipes in one place is something not to be missed.' Jamie Oliver ______________ Opened by Rose Gray and Ruth Rogers in 1987, the legendary River Cafe changed the way we cook, eat and think about Italian food. Over decades, they travelled extensively through Italy, cooking with friends, chefs and wine makers, who shared with them their traditional and regional classic family recipes. This book is Rose and Ruth's personal interpretation of those precious recipes, the pages rich with their experiences and knowledge. A passionate celebration of Italy and its unique culture of food, these 200 inspiring recipes sit side by side with memories of the places, stories of the people, and insights into the regions, seasons, ingredients and techniques. Woven with evocative photography taken in the Italian homes where Rose and Ruth cooked, and in the cities, villages, vineyards, markets and shops they grew to know so well, this is a book you will turn to time and time again, for special occasions, everyday meals, or simply to read and relish. 'It's hard to decide . . . Rose and Ruthie's outstanding restaurant, or their wonderful and inspiring cookbooks. If pushed, I would plump for the latter.' Hugh Fearnley-Whittingstall 120 colour photographs

Rose Gray MBE and Ruth Rogers MBE launched the River Cafe in 1987 and went on to achieve a worldwide reputation for their cooking. They have written several bestselling River Cafe cookbooks and presented The Italian Kitchen for Channel 4. Rogers has continued to run the restaurant after Gray sadly passed away in 2010, and it still holds the Michelin star that it was first awarded in 1998.