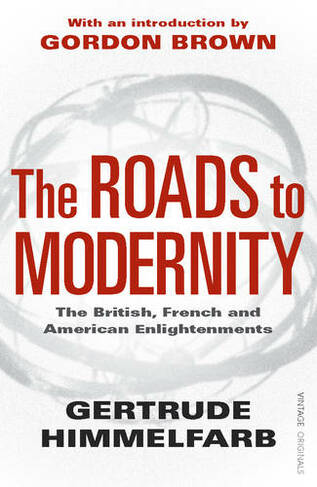 The Roads to Modernity: The British, French and American Enlightenments

By Gertrude Himmelfarb (Author), Gordon Brown (Contributor)
Paperback
https://www.whsmith.co.uk/products/the-roads-to-modernity-the-british-french-and-american-enlightenments/gertrude-himmelfarb/gordon-brown/paperback/9781845951412-01-000.html £10.11 rrp £10.99 Save £0.88 (8%)
GBP
Availability
Currently unavailable. We don't know when or if this item will be back in stock
Free Saver Delivery on orders over £20
Details
FREE SHIPPING over £20 for Saver Delivery
Share

Gertrude Himmelfarb's elegant and wonderfully readable work, The Roads to Modernity, reclaims the Enlightenment from historians who have downgraded its importance and from scholars who have given preeminence to the Enlightenment in France over concurrent movements in England and in America. Himmerlfarb demonstrates the primacy and wisdom of the British, exemplified in such thinkers as Adam Smith, David Hume, and Edmund Burke, as well as the unique and enduring contributions of the American Founders. It is their Enlightenments, she argues, that created a social ethic - humane, compassionate and realistic - that still resonates strongly today.

Gertrude Himmelfarb has taught at the Graduate School of the City University of New York, where she was named Distinguished Professor of History in 1978 and is now Professor Emeritus. She has received the two highest honours bestowed by the United States for distinguished achievement in the humanities: the Jefferson Lectureship in the Humanities in 1991, and the National Humanities Medal in 2004. She is a Fellow of the British Academy, the American Academy of Arts and Sciences, and the American Philosophical Society, and is a member of the Council of Scholars of the Library of Congress. She lives in Washington, D.C.