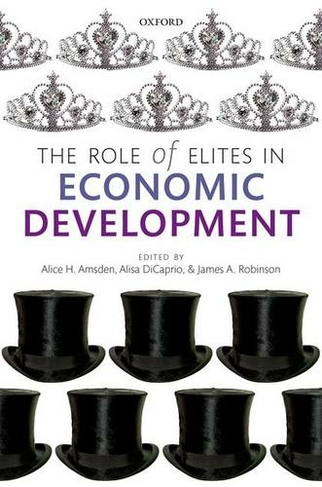 The Role of Elites in Economic Development

Elites have a disproportionate impact on development outcomes. While a country's endowments constitute the deep determinates of growth, the trajectory they follow is shaped by the actions of elites. But what factors affect whether elites use their influence for individual gain or national welfare? To what extent do they see poverty as a problem? And are their actions today constrained by institutions and norms established in the past? This volume looks at case studies from South Africa to China to seek a better understanding of the dynamics behind how elites decide to engage with economic development. Approaches include economic modelling, social surveys, theoretical analysis, and program evaluation. These different methods explore the relationship between elites and development outcomes from five angles: the participation and reaction of elites to institutional creation and change, how economic changes affect elite formation and circulation, elite perceptions of national welfare, the extent to which state capacity is part of elite self-identity, and how elites interact with non-elites. 30 Figures, 48 Tables

Alice Amsden (now deceased) was Barton L. Weller Professor of Development Economics at the Massachusetts Institute of Technology. She authored Asia's Next Giant and the Rise of 'The Rest'. Most recently, she criticized the 'capabilities' approach to poverty alleviation, arguing that healthier and more educated job seekers cannot get jobs because there are none, and they cannot lower their subsistence wage any further. Some of her last work, alongside co-directing theUNU-WIDER research project and co-editing the resulting volume on the role of elites, was on a manuscript entitled 'The Rational Revolution: Learning from Role Models, Deserting Deductive Theory', which maintains that countries develop by studying what each other do, not from poring overEnlightenment propositions in their orthodox or modern manifestation.Alisa DiCaprio joined the Asian Development Bank (ADB) in 2012 where she is a Regional Cooperation Specialist in the Office of Regional Economic Integration (OREI). She has a PhD in Urban Studies from MIT and an MA from Johns Hopkins University. Prior to joining ADB, she worked for the United Nations University World Institute for Development Economics Research (UNU-WIDER) in Helsinki, Finland. She did her post-doctoral fellowship at New York University's Alexander Hamilton Center for PoliticalEconomy. In OREI, she is part of the Trade Team and works on issues including Aid for Trade, Free Trade Agreements and Least Developed Countries. Her research interests include fragile states, trade and development, and social protection.James Robinson is David Florence Professor of Government at Harvard University and a faculty associate at the Institute for Quantitative Social Science. Professor Robinson studied economics at the London School of Economics, the University of Warwick, and Yale University. He previously taught in the Department of Economics at the University of Melbourne and the University of Southern California. Before moving to Harvard he was a Professor in the Departments of Economics and Political Science atthe University of California at Berkeley. His main research interest is the political economy of development with a particular interest in Latin America and Sub-Saharan Africa.